Between January 1st and April 4th 2010, 233 ships were sent to be demolished. The rhythm remains elevated, with 18 ships per week. In number of ships to be demolished as well as tonnage, India, with 120 ships (42%), remains destination number 1 before Bangladesh with 55 (24%), Pakistan with 25 (11%), and China with 23 (9%).  The accumulated demolition will permit the recycling of nearly 2 million tons of metal.

The crisis is over !
The prices offered by the demolition yards have significantly increased and continue to increase in the yards of the Indian subcontinent, but also in China; they have reached $400, even $500 for oil tankers and more for ships containing stainless steel. The record of the trimester was obtained by the Norwegian chemical tanker Spirit, bought for $780 per ton by an Indian yard, a price rarely reached even in 2008.

The twilight of tankers
There has been a great return of tankers, which began in the last trimester. While in 2009 they represented less than 20% of demolished ships, oil, chemical and gas tankers constituted the largest category of ships going to the breaking yards this trimester with 95 ships (41%). Despite announcements of an alleged boom in their demolition, only 37 were single-hull tankers. Their median age is 26.6 years while it is only 24.3 years for double-hull, double-bottom or double-wall ships, perhaps a sign that the difficulty of their upkeep shortens their careers. General cargo ships, with 53 (23%) as well as container ships with 27 (12%) and bulk carriers with 23 (10%) are marking time. In volume, the tankers together represent more than 1 million tons, or 55%, of recycled metal. 11 VLCC (Very Large Crude Carrier) were sent to the breaking yards. A number of ancient oil tankers, used for years as floating storage and without self propulsion, arrived at the end of their lives. For example, the case of the fifty year old Brazilian Presidente Floriano, the demolition of which was announced in 2003, but which continued acting as floating storage in the Amazon. The ship, towed from Manaus, was received at Alang as a “dead vessel.”(see p 9).

A rudderless Europe
Unlike Japan, which has just financially contributed to the experimental dismantling of the car carrier New York Highway in the local breaking yard of Muroran (see p 31), the European Union delays putting into reality its potentially good and compassionate resolutions concerning the dismantling of ships. Despite the proposals and consultation of the Environmental Directorate of the European Commission, the regulatory advances are frozen. The shipping industry opposes the creation of a fund supplied by ships entering European ports, the establishment of a list of ships ready for demolition, and more generally any potential constraint on maritime transport activities.

European owners therefore continue to export their scrap with hardly any restrictions. The Margaret Hill was detained in summer 2009 by the British authorities, who suspected its demolition in Asia, then let it leave to continue its operations.  In reality, the ship had passed a warm but idle winter in Dubai.  It was just rechristened Chill and took on the flag of the Comoros, one of the worst flags of convenience on the blacklist of the Paris Memorandum. She may be in the Indian Ocean en route for demolition in a Chinese breaking yard. If one uses as a reference the French ship (formerly) Descartes destroyed in Bangladesh, there is at least 1,500 tons of asbestos aboard the Margaret Hill.

The MSC Nikita collided with the Nirint Pride on August 30, 2009 20 nautical miles off the Dutch coast, while she was returning to Anvers from Klaipeda (Lithuania). The ship was towed to Rotterdam and relieved of its cargo; this container ship built in 1980 has since been declared “lost” in light of the damage to its engine room.  Despite the proximity of the breaking yards in Hartlepool, Belfast or Ghent, and contrary to what had happened for the MSC Napoli (property of the British company Zodiac Maritime) which was dismantled in Belfast by Harland & Wolff, the Swiss owner Mediterranean Shipping Company just sold the MSC Nikita (renamed Niki) for demolition in China.  The Niki left in tow from Vlissingen for Shanghai on April 2. All identification marks of MSC have been erased, including on the chimney. 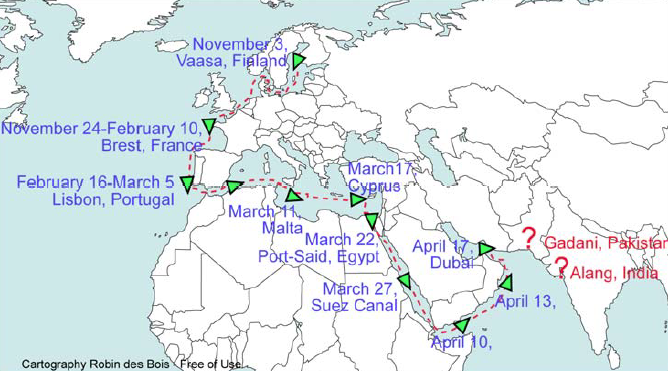 The symbol of the European Union’s willful blindness is the ferry Onyx, which departed from Vaasa (Finland), was immobilized in Brest (France), took refuge in Lisbon (Portugal), and toured the Mediterranean around Malta and Cyprus. After having crossed the Suez Canal, she is currently sailing in the Indian Ocean. She is expected soon by the ship breaking yards where her Indian owner sends its ships. (Cf. Rose S, p 29).

EU member countries pretend to believe in the continued operation of old and useless ships and let them leave for demolition in Asia.  Rare are the European owners who assume their responsibilities concerning the demolition of their discarded ships.

The Danish owner DFDS, despite it all, has just sold its ro-ro Tor Anglia for demolition in a Chinese breaking yard while adding to the contract a clause according to which it reserves the right to approve the yard.  Some of the pollutants were removed from the ship before its departure and its bilge waters will be pumped and then sent back for treatment in Europe.  At the appeal of Robin des Bois, a commitment in this direction was made in France: “Support that the European Union require proof that the dismantling country has adequate capacity for the treatment or storage of dangerous waste or that it impose, as a transitional measure, the return to Europe of dangerous waste in the framework of the Basel Convention.”

Old ferries and passenger ships built in Europe consistently supply the Asian ship breaking yards and particularly the Indian ones, with toxic materials. The flow is persistent of these old ships originating from Germany, Denmark, France, Italy or the United Kingdom. They were used for a time for the risky transport of pilgrims to Mecca like the Mogador (formerly Pride of Cherbourg) or directly scrapped by their European owners like the Greek cruise ship Ivory, renamed Winner 5.

A failure in the United States
In the United States, the Maritime Administration continues the destocking of its old ships.  The last two Victory Ships of the reserve fleet of California as well as an old oil tanker built in 1943 were the object of demolition contracts.  An agreement was made between the federal government, the regional authorities of San Francisco Bay, and environmental associations in order to eliminate the sources of pollution due to the positioning of this old fleet in Suisun Bay. The Administration promised to assure the maintenance and cleaning of the ships. The ship decks should be cleared of paint flakes in under 4 months, the hulls cleaned within 2 years, the 28 ships in the worst state (there are 52 total) sent to be demolished before September 30, 2012 and the other waiting ships before September 30, 2017. All these veterans will undergo a preliminary cleaning of their hull in dry dock before leaving for the demolition yards of Texas via the Panama Canal. 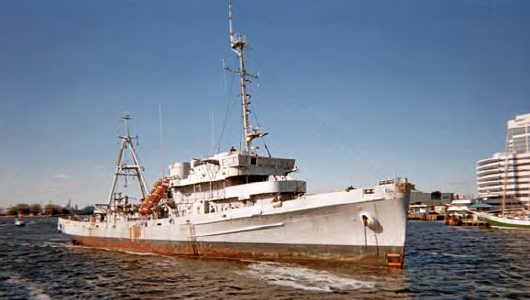 But on the opposite side of recycling, which shows its respect for the environment and federal and state laws, US MARAD is renewing the old and economical method of reefing. One remembers that the day after the return of the Clemenceau to Brest in May 2006, the American Navy sank the aircraft carrier Oriskany [10] without drawing reproach from ecologists. This practice, which is contrary to international legislation, has since been virtually abandoned. The American Administration has revived the practice: it is going make a “gift” to the Cayman Islands of another old ship built in 1945, the submarine support ship Kittiwake.  The Kittiwake will be sunk the next 4th of July and will become an artificial reef for an exotic diving site after a cursory cleaning and the cutting of openings to permit divers to easily visit the ship; it will join the Cuban frigate of Russian origin 356, renamed Captain Keith Tibbets before its submersion in 1996. This “gift” permits the United States to save $170,000, the cost of demolition in an American breaking yard, at the rate of $96 per ton requested for the dismantling of the Escape, another support ship, in August 2009.

After the bars, the breaking yard
The substandard ships are prioritized for breaking, but they were not demolished in the countries, notably European, which detained them: at least 108 ships (47%) were the object of prior detention(s) in world ports, with a detention rate of more than 80% for bulk carriers; 67 (29%) were controlled by a classification society not belonging to IACS (International Association of Classification Societies) or were without classification.

Years and meters
The age at the end of life for ships leaving the fleet during the period from January 1st to April 4, 2010 ranges from 16 years for the tanker Eco Africa, victim of a fire in October 2009 while offloading its cargo of crude oil (see p. x) and 65 years for the Victory Ships of the American Administration; the median age is 30 years; it is 26 years for tankers, 27 years for container ships and 39 years for ferries and passenger ships.  79 ships have a length of less than 150 m, 99 measure between 150 and 199 m and 55 between 200 and 336 m.