–       A rotten egg for the US Navy: the dismantling of the USS Saratoga delayed by a brood of Peregrine falcons (p 7). 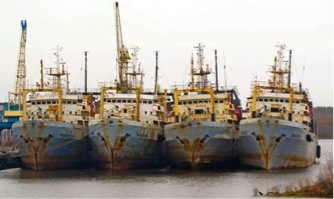 [1]
The Bochkov Family is waiting for scrapping © Eugene Iron