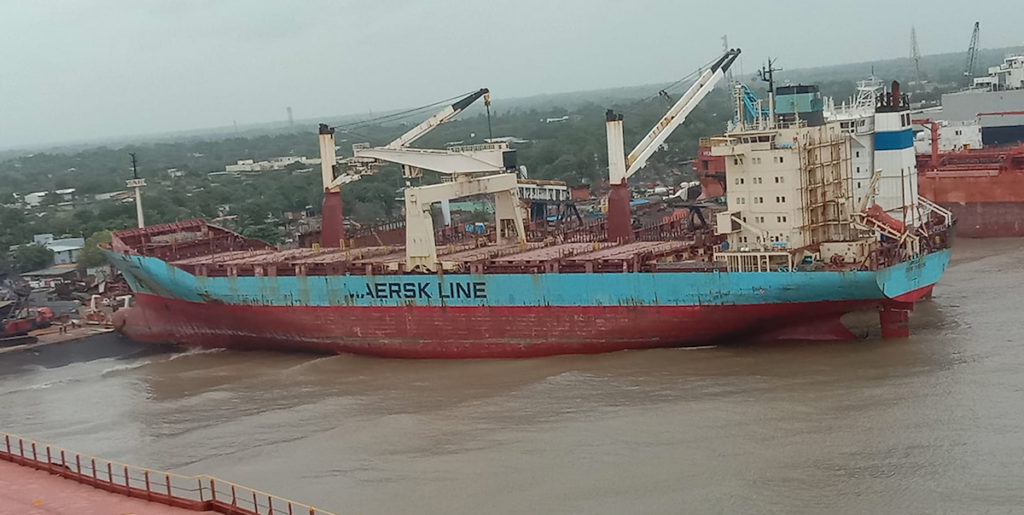 Alang and its shipbreaking beaches welcome their 3rd aircraft carrier, an antique of English origin festooned with asbestos and PCBs and smelling Falklands powder.

A Russian nuclear-propelled cargo carrier doomed to be broken up between 2008 and 2012 was brought back to life in 2013. She is heading for Antarctica and since two weeks has been wandering off Angola and Congo Brazzaville.

A whole era and baskets of memories are little by little sinking into oblivion. The procession of cruise ships slowly guided to the cemeteries of the Eastern Mediterranean and the Indian Ocean gets longer every month. The cruise industry blinded by the easy dollar euphoria did not see the Covid-19 wave coming. It had become accustomed to good old-fashioned gastroenteritis epidemics and had never considered that viruses too could take a giant leap. Some Greeks owners bought old hulls and offered suicidal people cruises to Turkey and Egypt as early as March 2021.

The towing towards shipbreaking yards of damaged or powerless ships sometimes ended down on the ocean bottom or at the foot of cliffs. “Shipbreaking” takes stock and gives advice to shipowners to reduce environmental risks and damage to their reputation.

India and Pakistan with offers between 300 and 350 US$ per ton of metal magnetize ship owners and attract container ships.

The container ship Ever Decent, which collided head-on with the Norwegian Dream and her 1,750 passengers on August 24, 1999 in the North Sea, has arrived at the Indian shipbreaking yards. After she was repaired, she continued her maritime stagecoach ride under the whip of Evergreen.

The Stellar sibling saga is coming to an early termination in Pakistan and Bangladesh. These ex tankers converted for iron ore transport between Brazil and China have been recognized as high risk ships since the sinking of the Stellar Daisy in the South Atlantic in March 2017 and the death of 22 crewmembers.

The waste-wreck of the Norwegian-flagged car carrier Hoegh Xiamen, full of soot and dioxins after suffering a smouldering and torrid fire in Jacksonville (Florida, USA), has gone elsewhere, no matter the risk of contamination for the demolition workers of Aliaga, Turkey.

The terrible Beirut disaster had a positive effect. It has destroyed two maritime livestock carriers. There were no sailors and no cows on board at the moment of the ammonium nitrate instant explosion. A third livestock carrier managed to get cured and escaped to Greece.

On the picturesque and surprise package shelf of the maritime world, “Shipbreaking” # 61 noted that a small general cargo carrier, the Roger Rougier, built in 1969 in Tonnay-Charente (France) near La Rochelle, has just been scrapped in New Zealand where she ended her career as the hopper dredger Coastal Carrier. The Igrim, built in 1978 in Finland for the Soviet Union is being scrapped in Pakistan. This multipurpose tanker used to carry in her tanks oil product, vegetable oil and whale oil.