It is said that the Japanese government is about to authorize the release of radioactive water from Fukushima Daiichi into coastal waters and the ecosystem of the Pacific Ocean. Tepco, operator of the plant that crashed on March 11, 2011, the Ministry of Economy, Trade and Industry and the International Atomic Energy Agency are promoting this option. This voluntary pollution would set a precedent that could be brought up again in the Atlantic Ocean in the event of a major accident at a nuclear power plant or at the La Hague atomic complex in Normandy.

The NGO Robin des Bois (Robin Hood) deplores the fact that the option of storing contaminated water in barges inside the port of the damaged power plant, whose dikes have been raised to prevent the intrusion of a new tidal wave, or in another refuge, is not being considered.

The barges are floating storage vessels generally not propelled. They are used to store oil or water. As an example, the Palanca built in 1991 in Nagasaki by Mitsubishi Heavy Industries has a capacity of 300,000 m3 of oil in 8 tanks. Thirty years after its launch, it is still in operation off Angola. These floating storage tanks have a proven longevity and robustness provided that maintenance is ensured.

Without being hooked by the gigantic size of the barge Palanca, the option of storing contaminated water in barges with a capacity of, for example, 100,000 m3 would give the parties involved in the cleaning and the dismantling of Fukushima Daiichi an additional and substantial means to manage post-disaster liquid waste. This storage would have the advantage of allowing the radioactive decay of tritium and other short-lived radioelements. Pending the swift construction of specialized barges in Japanese yards or in neighboring countries, double-hulled barges with a capacity of 10,000 to 15,000 m3 are currently available on the second-hand market for a few million US$. Such storage in barges or converted oil tankers had been mulled by the Japanese authorities in the weeks following the accident and the city of Shizuoka had made available a barge with a capacity of 13,000 m3 as a first emergency measure. This modus operandi was discarded in favor of hundreds of land-based tanks which remain irremediably vulnerable to earthquakes. It seems that one of the arguments that led to the abandonment of this solution was the need to decontaminate the barges or ex-oil tankers after use or to consider them as additional radioactive waste to be scrapped and stored. However, the dismantling of land-based tanks after use will face the same difficulties.

The waste water that the Japanese government plans to dump at sea comes from rainwater runoff and typhoons, polluted groundwater below the broken down reactors, and water injections needed to cool molten nuclear fuels. To date, one billion liters of radioactive water are stored in one thousand tanks within the plant’s territory. There would be no room to install new tanks when the daily flow of waste water is an additional 100,000 to 200,000 liters. Dumping at sea would be done through pipes from the coast line. Emptying would take 40 to 50 years.

The transfer of radioactive water to another land-based site is considered impossible or too long to implement. Neighboring communities and populations would oppose it. “The risks of leakage during transport cannot be excluded,” adds the Tepco dossier. On land, a leak of a few dozen liters would therefore have unfortunate consequences. On the other hand, a voluntary spill of one billion liters into the Pacific Ocean would have no harmful effects on marine organisms, fishermen or the health of seafood consumers. To justify itself, Japan says that the dominant radioelement in the radioactive flow to be dumped is tritium and emphasizes its harmless character. However, for the past twenty years or so, the alleged harmlessness of tritium radiation has been questioned by experts*. It would in fact be able to accumulate in aquatic organisms, primarily invertebrates, crustaceans and groundfish, and trigger chromosomal aberrations and fertility losses.

The start of the at sea waste disposal would not begin before 2022, the time to make administrative and legal adjustments and tank-by-tank controls of the residual radioactivity, the time also to convince local, national and international public opinion about the merits of spreading post-accidental radioactive waste in the oceanic common good.

Letters from Robin des Bois to Tepco, the Japanese Ministry of Economy, Trade and Industry and IAEA experts were sent. They ask each of these stakeholders the reasons why the use of floating storage is no longer being considered when it could obviously contribute to the resolution of a crisis that will last at least until 2060. Robin des Bois is waiting for their answers.

* Read the “white paper” on tritium published in France by the French Nuclear Safety Authority in June 2010. 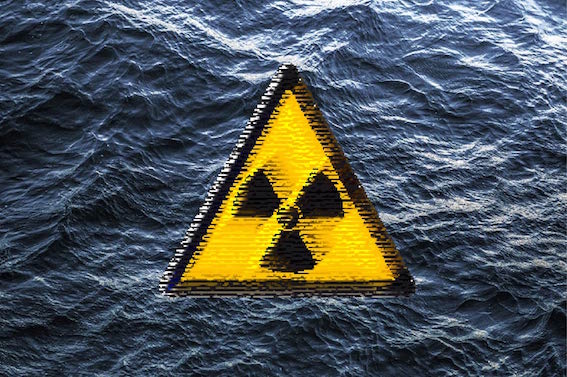