“On the Trail” n°16, information and analysis bulletin on animal poaching and smuggling [1]
697 events from the 1st January to the 31 of March 2017
116 illustrated pages
Whales and marine mammals, pages 12 to 13

De-Frog Us- Pages 25 to 26
For the French stakeholders at international conventions concerning the protection of whales, wetlands and endangered animal species, the question regarding the addiction to frog legs always comes up. Even at the end of the world, it always returns to us like a boomerang. The frozen frog legs sold in Picard, the French supermarkets specializing in frozen foods, come from Indonesia under a misnomer and the French State, under the direction of the prefect of Franche-Comté, the froggiest region in France, authorizes the capture of two million frogs each year.

The misfortune of Donkeys- pages 109 to 113
All of the continents are affected. Europe is still preserved. The donkeys are stolen by the thousands, slaughtered savagely and the skins sent officially or by contraband to China in order to produce ejiao, the miracle product that postpones menopause and keeps workers in high spirits.

Are poachers being paid by Monsanto?- Pages 37 to 41, pages 92 and 96
They continue to take it out on animals that are natural insecticides like pangolins, four-fingered tamanduas, and aardvarks.

There’s a Wolf- Pages 61 to 63
In British Columbia, the Sakha Republic, and Europe, wolves receive bullets and taunts. In North America, Sadie Parr, director of Wolf Awareness fights fiercely for wolves and against an air gunning project. “The resilient nature of exploited wolf populations does not excuse our butchery of them” she says. 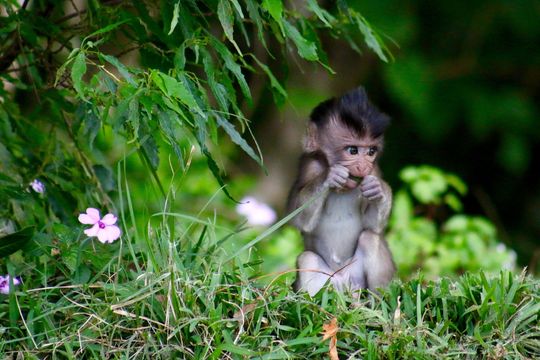