The tsunami which followed the Japanese earthquake devastated around 300km of coastal cities, towns, farmlands and greenhouses along Japan’s Pacific coastline. The wave was reported to have spread up to 10km (six miles) inland and inundated around 500km². Not only did the earthquake and tsunami create an estimated 25 million tonnes of rubble, but when the tsunami receded it dragged with it countless quantities of waste in the flooded zone. Furthermore debris continues to be carried downstream by water pathways into the ocean. Eventually all forms of waste will enter into the same vicious ocean circle. The entire voyage around the North Pacific could take around ten years. 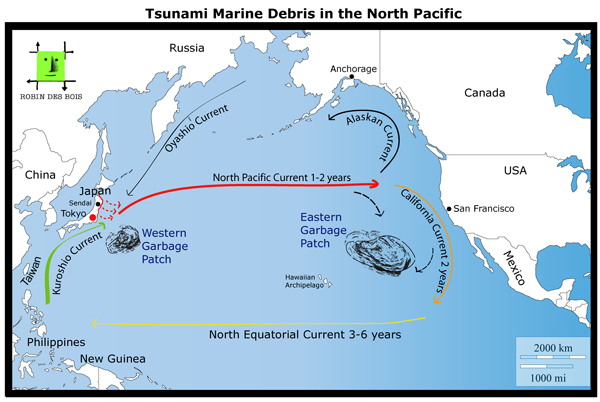 The waste swept out to sea came in many forms such as airplanes, thousands of vessels, cars and tanks which will progressively discharge oil and fuel creating numerous oil spills. Quantities of industrial and household waste including containers and drums filled with pesticides, cleaning products, heating fuel… will also disintegrate and release their contents into the sea. Therefore the ocean is not only contaminated by radioactive releases far from it.

Along with the 200,000 damaged or wrecked buildings went the furniture, septic tanks, electronic waste and numerous objects amongst others pharmaceutical products, PVC piping, plastic, metal, wood and rubber items. The disaster generated a huge dump in the ocean; today international conventions outlaw illegal dumping at sea because of environmental hazards. Specific types of waste are particularly hazardous as they contain Persistent Organic Pollutants (POPs) such as Polychlorinated biphenyls (PCBs) and Brominated flame retardants (BFR) widely used in electrical household appliances as well as insulating foams.

Heavier and dense debris sank straight off the Japanese coast and will hinder trawl fishing and possibly endanger fishermen’s lives. Some degraded floating litter will settle on the ocean’s depths dragged down by living organisms such as seaweed. Scientists have observed waste at 7,216 m in depth in the Ryukyu Trench, East of Japan. The majority of waste recorded is plastic and accumulates where deep sea life dwells.

The plume of marine litter will eventually be picked up by the North Pacific Drift. The North Pacific Drift is a continuation of the Kuroshio Current which eventually flows towards the American coastline. Yet to ultimately reach the shore it has to be carried by coastal winds and currents. Apart from other navigation hazards ships and submarines can get entangled in derelict gear or collide with larger debris. When Typhoon Morakot hit Taiwan in 2009, 170,000 tonnes of driftwood were recuperated from Japanese territorial waters; yet the majority of the floating wood was carried away by Pacific currents.

The tsunami debris will move at an average speed between 5 -10 miles a day. Within two years a small percentage will drift northward with the Alaskan current. However, the bulk will not be driven southwards by the Californian current before at least another 2 years. Ultimately it seems that it would take between 3 to 6 years before some debris is pushed back driven by the North Pacific counter current to the Asian coast and finally looping the Pacific. It must be noted that along this trajectory marine litter will be fed into the North East Pacific Garbage patch located between California and Hawaii. Debris becomes trapped in the “whirlpool physics” of the vortex, breaking down into even smaller pieces. It is believed that the first floating debris such as empty bottles and plastic wrappers could wash upon the Northern Hawaiian Islands shores as early as next spring.

A recently discovered new trap the Western Garbage Patch off the coast of Japan could suck in smaller debris. Overtime plastic debris eventually fragments into tiny particles creating “plastic plankton” or “microplastic” which is a serious long term concern, particularly for marine food webs. A scientific study quoted in Marine Pollution Bulletin shows that litter was transported by Laysan Albatross from the Western Pacific marine dump to their nests at Kure Atoll in the centre of the Pacific Ocean – a flight of over 4,000km. Marine debris was found weaved into the birds’ nests and ingested by hatchlings. This is where the principle problem from this wandering waste lies; it lures birds, fish, marine mammals and turtles. Ingestion causes starvation and internal injuries. Not only does plastic debris absorb toxic chemicals such as flame retardants and PCBs, but it also transports bacteria and invasive species.

Derelict equipment will continue “ghost fishing” for as long as the gear remains intact. Many ocean creatures will become entangled and if they cannot free themselves in time, will die. In the Pacific Ocean, a 1,500 meter long net which was thought to have drifted for one month travelling over 60 miles contained: 99 seabirds, 2 sharks, and 75 dead salmons. Sea birds and mammals such as the endangered Hawaiian Monk Seal may become trapped in these nets as well.

The 25 million tonnes of waste on land are under the responsibility of the Japanese authorities (see press release After Shock I). However, marine debris caused by the tsunami has become an international concern. It is time for the international community to start looking for solutions on how to recover marine litter following natural disasters. Short-term clean-up is paramount before the fields of debris scatter. In general there is an urgent need for more data on the extent of litter at sea including characterisation of toxic-waste and a review of their effects on the marine food webs.