For a French ecologist who is accustomed to hydrocarbon and Volatile Organic Compounds odours, depending on Doha weather conditions, resembles both Fos-sur-Mer and Le Havre. The city is often covered by a smog of Arabian light oil and from the CITES conference centre, super-tankers can be seen crossing dhows made out of mangrove forest wood. The Israeli delegates are protected under tight security measures. That CITES (Convention on International Trade in Endangered Species of Wild Fauna and Flora) in spite of diplomatic embargos permits for Israeli scientists and Arab countries to try to insure the survival of the ornate spiny-tailed lizard by listing it under appendix I is to the credit of the convention. Its range state residual intersects Saudi Arabia, Egypt, Yemen and Israel. In Doha, WWF and the Union European are global warming sceptics; they refuse the inclusion of the Polar Bear to appendix I. 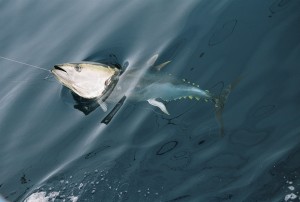 Monaco’s proposal to list the bluefin tuna under appendix I and the amendments which could possibly be presented by the European Union does not offer any guarantee to the date of enforcement on banning international trade not even on its reality. The proposals are interpreted by many observers as weakening the importance and the responsiveness of the appendix I, which, since the implementation of CITES has always been considered the ultimate weapon and measure for extreme emergencies for all species. Species which are listed under appendix I before appendix II are rare except under exceptional circumstances. Finally If listed under appendix I the risk includes changing worldwide of fast food sushi menus while moving fishing efforts to other species of tuna which are today at the limit of overexploitation such as the yellowfin, the bigeye tuna or even stocks of the bluefin tuna in the South Pacific. The proposal from Monaco notes that once transformed for the market it is very difficult even impossible to visually distinguish between the bluefin, bigeye or yellowfin tuna species. In the fishing and the conservation of marine biodiversity domains, the perverse yet predictable effects of banning certain fishing techniques or specific catches are largely underestimated. It is possible and Robin des Bois has not stopped repeating it to the French authorities and to NGOs for a number of months that this unnecessary stance of force with Japan will not create any lean way in negotiations at the International Whaling Commission IWC. One can only hope and try to make sure that the member Parties of CITES take a middle way in proposing the listing of the bluefin tuna under appendix II.

Concerning sharks, the European Union is in this case more pragmatic by suggesting to list under appendix II two species of sharks which undergo an even greater threat than the bluefin tuna, Appendix II would be a blessing for sharks and a joke for the tuna.

This species was already subject to the same proposal by the European Union at the 14th conference of the Parties in June 2007 at The Hague in the Netherlands. Island, the Qatar, China, Japan, Singapore, Guinea, Indonesia consider that the fall in population in the North East Atlantic was compensated by an increase in the North West Atlantic, while Japan expresses fears about a potential price increase. In December 2009, the European Union adopted under the framework of the Common Fisheries policy a zero quota for 2010. ICCAT which also treats this shark species requires its member states to reduce targeted fishing efforts on porbeagle and frequent by-catches of swordfish fishing.

Spiny dogfish (Squalus acanthias) has already been subject to exactly the same proposal by the Union European in 2007 in The Hague. It is literally on the brink of extinction in the North East Atlantic. China Japan, Argentina, Norway, New Zealand, Guinea, Island and Canada have presented the same arguments as for the porbeagle. The already pressing global demand on spiny dogfish fins and tails is further worsened by new pressing demand for cartilage and oils both for alleged medical virtues.

The United States of America and Palau propose the inclusion to appendix II six shark species which are over-exploited for their fins. In the Mediterranean the population rates of the scalloped hammerhead shark (Sphyrna lewini) have been subject to decline of more than 99% since the beginning of the 19th century. In the North West Atlantic, the scalloped hammerhead shark the same as its allied species the great hammerhead shark (Sphyrna mokarran) and the smooth hammerhead shark (Sphyrna zygaena) were commercialised and suffered from a decline of 72% in population size between 1987 and 2005. Every year 50 to 90,000 tons of fins could be commercialised in the world whereas registered landings only total 3,645 tons, the fins are negotiated for around 133 dollars (U.S.) per kilogram. For the same reasons the proposal includes the sandbar shark (Carcharhinus plumbeus) and the dusky shark (Carcharhinus obscurus).

Oceanic whitetip shark (Carcharhinus longimanus) as the aforementioned the Oceanic whitetip shark species ranges in the Atlantic Pacific and Indian Oceans and adjacent seas. The meat is rarely consumed; the fins are less valuable than that of the hammerhead species (45 to 85 dollars U.S. per kilogram). The Oceanic whitetip shark fins represent 2% of the global volume in the world markets, ie. 22,000 tons removed from 600,000 individuals of which the majority of the bodies are thrown into the ocean after mutilation.

Across the worlds oceans sharks are almost all by-catches. So they are discarded and not accounted for but at the same time the fins give fishermen and restaurant owners considerable benefits.