Radium water fountains or radium vaporizers were used in the first half of the twentieth century to enrich the water with radon, descendant of radium. In this time period, they didn’t mistrust radioactive gas but rather boasted of its virtues.

Today these ornamental objects find themselves in attics, flea markets, and bric-a-brac sales. 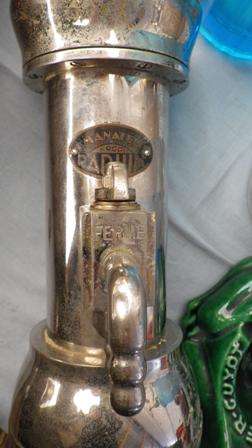 A radium water fountain had been located by a pedestrian Sunday, April 22nd, 2012 at the Puces flea market of Villeurbanne, next to the Lyon canal. Some photos had been taken on the premises which left no ambiguity as to the uses of this object and had been sent by the Robin des Bois witness.

Sunday, April 29th, while some agreements had been taken between the interested parties, the antique dealer expressed his reluctance to make contact with ANDRA (National Agency of Radioactive Waste); he pretended to give the suspicious object back to a “consignment shop”.

Radium water fountains are sensitive radioactive equipment that can expose the populace to the serious risks in case of contact or from prolonged exposure. In this particular case, the major risk would come from taking apart the fountain, extraction of the radium source, and its poor management.

Robin des Bois requests to the owner of this object to make contact as soon as possible with ANDRA’s toll free number 01-46-11-83-27. ANDRA by virtue of the law from June 28th, 2006, on the sustainable management of radioactive waste and materials freely takes charge of radioactive objects held by retailers or individuals. They are later put into storage away from human contact. You cannot blame someone for unknowingly holding radioactive waste; you would blame him for knowingly keeping a radioactive waste.

The half-life of radium is 1.6 years.