The cutting out of the cargo ship is a provocation regarding every observer endowed with common sense. The photos of the demolition demonstrate that even while the wreckage has its keel in the water, the shearing continues. The images of the polluted scrap metal floating in the sea water are overwhelming. They prove that the idea men and the workers on site disregard the marine environment, underestimating the effects of the contamination of the ecosystem and of the neighbouring marine communities by micro-pollutants from lead paint and operational residue from the ship itself. This shearing phase of the ship in the waves is comparable to rinsing scrap metal in the sea.

The so-called emergency has been used to justify this carelessness. Robin des Bois requests the prefect of Morbihan to respect, as soon as possible, Article 2.1.1 regarding general objectives on the prefectural mandate of conservative emergency methods from December 26, 2011. 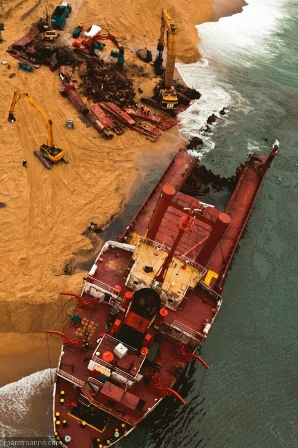 [1]Oil, hydrocarbons and unidentified toxic effuent leaks can be seen at sea around the wreck. Photo Philippe Plisson. [2]