“If there was a first mistake, it was to think that a human creation was impervious to all forms of destruction, and the second was to be persuaded to also not develop a rescue solution in case of such a disaster,” says Pierre Bayard. “The Titanic will sink,” Editions de Minuit, Paris (France), October 2016.

Mega-cruisers like the MSC Meraviglia are the worst nightmare of maritime authorities and at-sea rescuers. Evacuating 7 to 8,000 people in case of a collision, fire, attack, or a shipwreck in high seas or at night is mission impossible. Ship owners do not even dare to practice this global drill in a sheltered and sunny bay. It is worth noting that in July 2016, Bermuda Islands, and in September 2016, 2 evacuation crewmen drills aboard the Norwegian Breakaway and the Harmony of the Seas (Marseille) have been marked by the sudden fall of 2 launchboats totalling 2 lives lost and 7 seriously injured.

In the Atlantic Ocean and the Mediterranean Sea, the power and number of ocean going tugs are not sufficient enough to ensure that distressed “Gigantics” can be safely rescued.

But don’t prepare for anything worse!

MSC Meraviglia is one salesman of global tourism. The captain is Italian. The crew is multi-national, mainly Asiatic. Down at the bottom, they sleep a little in cells that are never exhibited. The MSC Meraviglia is under Maltese flag. The Swiss-Italian owner is short of transparency. The annual reports are not published. The sales revenue would be 25 billion US$. The second largest maritime company in the world is operating about 450 container ships. At the end of their lives, they are broken up in Alang, India, or sometimes in Bangladesh, Pakistan, or China. Robin des Bois’s quarterly bulletin on ship breaking has reported the scrapping of MSC’s 96 container ships since 2006. Only the MSC Napoli voluntarily grounded along the English coast in 2007 after a hull crack in the English Chanel, then was dismantled in 2 parts in the European Union Harland & Wolff dry dock, Belfast, Northern Ireland. The MSC Napoli was chartered by MSC to a shell a company registered in the British Virgin Islands.

Like all of the “Gigantics,” the MSC Meraviglia air pollutes and disfigures the call towns and are breaking in a remote and frightened islands thanks to extensive and disturbing dredgings. Mirroring the geopolitics of the world, the ray of disturbances of these floating blocs tends to diminish. The planned short cruises of the MSC Meraviglia in the Mediterranean Sea prudently confine themselves to Marseille, Genoa, Barcelona with only a swift detour towards Messina in Sicilia to avoid the migrants at sea and the attacks in the Maghreb region.

MSC understands that with this showiness and this mess of opulence, it is better to avoid being hosted by others and to stay at home. That’s why for the “Gigantics” operated from the United States of America, the company has just rented an islet in the Caribbean for the next 100 years, a MSC Land that will welcome its clients with “complete safety” in its exclusive place of call.

Note to editors: this press release was published at the inauguration of the biggest cruise ship ever built in the European Union. The MSC Meraviglia was built in the STX yards, Chantiers de l’Atlantique, in Saint-Nazaire, Atlantic Coast, France. 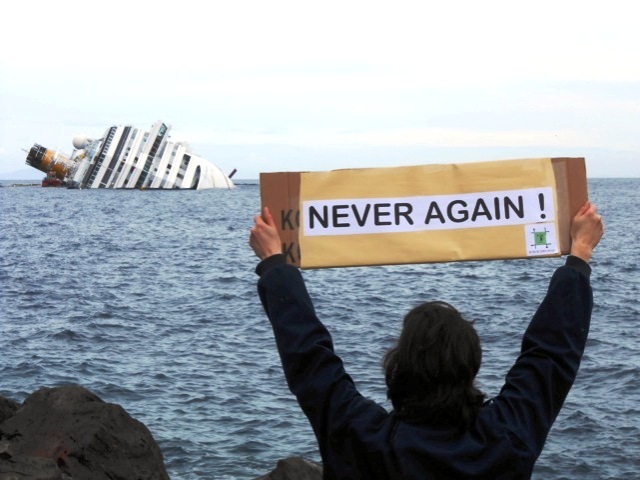