While the chopping down of fishing boats is persisting in the French slipways except for a few of them, declarations of good faith from the owners and from the excavators continue. Cargo ships and other large size vessels keep on, except for a few exceptions, to flow towards Asian graveyards under the common convenience flag of Consensus-and-status-Quo Islands.

Robin des Bois is releasing their 13th information bulletin on ship demolition [1]. Listed below are some bullet points from this bulletin which is available today on the associations’ internet site:

– The oceanliner Mermoz is to be demolished.

– The inappropriate behaviour of the Le Havre port authorities which sent to the Bahamas one of the greatest floating docks in Europe, useful equipment to repair or to dismantle vessels. Simultaneously the Le Havre port authorities have left to decay a Scandinavian lightship at the bottom of a harbours basin which is urgent need to be refloated and recycled. (photos) 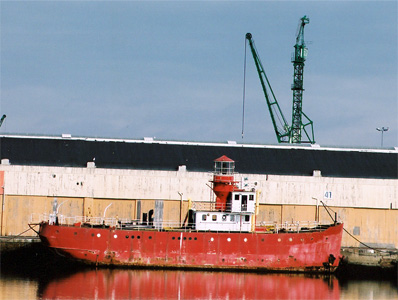 – The sale of two container ships to India without preliminary cleaning or a specific dismantling scheme. The ship owners, the German financial group KGAL (Dresdner Bank and Allianz) informed us in writing that “the demolition would take place due regard will be made to the environmental and safety implications” and that “in the absence of regulations, the appropriate industrial guidelines will be followed”.

– The per cent of 41% of the vessels fated to be demolished in Asia belonging to European or EFTA ship-owners.

– The demolition of the last of the thirteen ghost ships of the US Navy, a “packet” which was originally planned for the ABLE UK shipyard in Hartlepool in the United Kingdom where the first four which were towed five years ago are still waiting to be demolished.

The Clemenceau file is at a standstill. The Q790 should be towed to the same shipyard in Hartlepool at the end of this summer by the latest. The Able UK shipyard looks more and more like a ghost yard and is involved in a constant legal battle with the local group Friends of Hartlepool. They are indignant that their “little city could welcome a toxic ship and its lethal cargo” and “become a dumping ground for polluters world wide”. On the other hand, they did not react when British ship-owners sent five vessels to be scrapped in India without any pre-cleaning between June 7th and September 21st 2008. The British High Court is scheduled to announce today if the group Friends of Hartlepool complaint is admissible.

Moreover a vessel flying the British flag was also demolished in India. The Upstream, ex-CMA CGM Tage, ex-Fort Desaix belonging to CMA-CGM until May 2008. The announcement of the birth of the Fort Desaix in the « Courrier de la Compagnie Générale Maritime » Autumn 1980 allows the traceability of the toxic materials onboard ; Indian workers should accomodate themselves with these wastes. Radioactive smoke detectors have been supplied by Cerberus – Guimard, the BPC transformers by Alsthom Atlantique and Electronavale in Nantes, and the asbestos by Evers in Epouville near Le Havre, polluted site listed on the French Minister of Ecology and Sustainable Developpment national inventory.