In April 2020, a container ship left Naples with 282 boxes bound for the Tunisian port of Sousse. The cargo was destined for Soriplast in the industrial zone of Sidi Abdelhamid. Soriplast claims to be specialised in recycling used plastics. The containers were filled with household and sanitary waste. On 13 November 2020, the director of Anged (National Waste Management Agency) was dismissed by the head of the Tunisian government, Hichem Mechichi. According to the chairman of the Commission for Administrative Reform and the Fight against Corruption, the director of Anged is only a scapegoat, “senior officials from the Ministry of Environment are involved in this crime”.

A judicial investigation is open. Soriplast is said to have signed a contract to import 120,000 tonnes of waste from Italy in return for 48 €/tonne. As the media L’Economiste Maghrébin says on its website, this contract was aimed at turning Hannibal’s country into Rome’s rubbish dump. 70 containers remain under seal in the port of Sousse. Tunisia is negotiating with Italy to return them. One would think that we are back to the era of the waste spillage when, at the end of the 80s, Italy played a pivotal role in this type of traffic. The Basel Convention on the Control of Transboundary Movements of Hazardous Wastes and their Disposal came into force in 1992. It was intended to put a stop to the saraband of ships carrying rubbish bins. It was wanted. But over the years it has fallen asleep under the blanket of neglect, red tape and corruption. 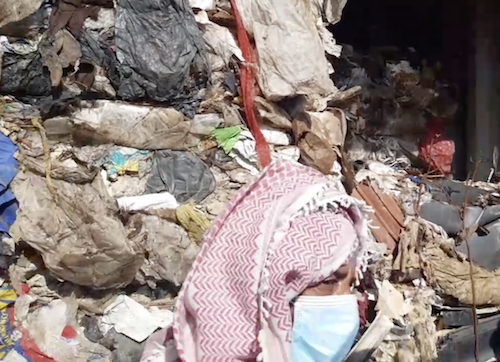 After a century of shipbuilding and ship repair, after the torpedoing of the former Yugoslav fleet in 1944 and after the earthquake of 1979, the Bijela ship repair yard is one of the most polluted sites in the maritime world. It was at Bijela that the Erika in autumn 1999 was patched up before breaking in two off the coast of Brittany in December. The conversion of this historic site into a maintenance platform for the yachts of the big fortunes in the Mediterranean is a flagship programme of the World Bank. The Montenegrin subsidiary of the French company Valgo, which specialises in cleaning up polluted sites, was selected by the World Bank following an international call for tenders. The option of sorting, inerting and the possible recovery of waste on site or nearby was ruled out from the outset by the Montenegrin government, which was considered the producer of the waste. A first delivery by sea to Ukraine resulted in a fiasco and legal disputes. Most of the waste from the Bijela shipyard is grit waste, i.e. waste lead, tributyltin paints and other metals and toxic substances such as PCBs from the sand blasting of hulls, decks, tanks and holds of ships undergoing renovation. The toxic levels in the waste delivered to Ukraine were reportedly higher than previously announced. In any case, it is deplorable that the World Bank and the General Secretariat of the Basel Convention did not oppose the transfer of such hazardous waste to Ukraine, which is, to say the least, not known for its expertise in this field. In a second phase, during 2019, 40,000 tonnes of waste were shipped to Andalusia (Spain) on board the Muzaffer Bey (Panama flag), the Marit and Rose (Netherlands), the Luca (Antigua and Barbuda) and the Lady Nurgul (Panama). After unloading in the port of Seville, the waste from Montenegro was transported by trucks to the Nerva landfill near Huelva. These massive and successive arrivals triggered the anger of local residents and local and regional NGOs. They are overwhelmed by the saturation and management of what they call “the toilet of Europe” and now of the Balkans. The World Bank does not care about these protests. In an interim report of June 2020, it assured that the Spanish government would authorise a new arrival of 45,000 tonnes in Andalusia as soon as the Covid-19 containment was lifted. This is not the case. Spain is determined to improve the management of the waste produced on its territory and is not at all keen to welcome a new shipment of 40,000 tonnes of sandblasting products to which are added contaminated oils and asbestos. A new option is in sight. All the waste would be transported by sea to the island of Langoya, off the Oslo fjord in Norway. There are tax havens in the European Union and in the European Free Trade Association and there are also havens for waste that the devil himself would be reluctant to accept in hell. On the island (15,000 inhabitants), the old limestone quarries were closed down in 1985. Since 1994, the pits, the bottoms of which are 50 metres below sea level, have been filling up with waste of all kinds and origins, liquids, solids and dusty from Germany, Sweden, Denmark and other European countries. 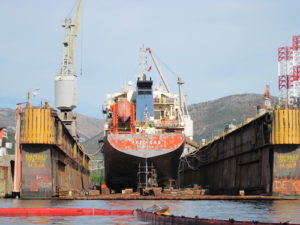 [1]
Rheingas, in the floating dock of the Adriatic shipyard in Bijela (Montenegro), October 2011 © Godra 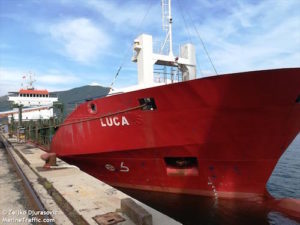 SRF (Solid Recovered Fuel) comes from the shredding of the furniture, bedding and other clumsy disused home and office equipment. They contain fragments of plastic, rubber, polyurethane foam, varnish residues, glue and other additives. The chartered merchant ships have a carrying capacity of 2000 to 3000 tonnes. They are able to sail up streams coastal rivers and fjords. Lorient and Brest are among the export ports. For example, the Sydborg left Brest in July 2020. After seven days at sea, she arrived in Södertälje, a Swedish town of 100,000 inhabitants. The risks to the marine environment from this traffic are not negligible. In March 2020, another small ship, which left Ireland heading to Sweden with 2000 tonnes of SRF, crashed on a reef off the coast of Scotland. She was refloated and emptied of her cargo. 30 tonnes of fuel oil went into the sea. The sinking of a ship stuffed with SRF would be a major catastrophe for the North Atlantic. Millions of floating micro-waste would drift away, poisoning fish, birds and marine mammals. The surplus would end up on the coastline. Sweden has about forty combined heat and power plants in the frame of the waste to energy program. Steam from the combustion of waste is fed into district heating network. The chimneys release dioxins and other toxic pollutants. The fly ash recovered from the bottoms of boilers is hazardous waste. Every year, Sweden exports about 100,000 tonnes of fly ash to the island of Langoya in Norway (see above).

Waste from wood shredding platforms from local waste disposal sites, economic activities and construction and demolition sites is also loaded onto cargo ships bound for Sweden. Traffic has been increasing since the beginning of the year, particularly from the Caen harbour in Normandy.

Probably no deal on fisheries before 31 December 2020. From the 1th January 2021, the Brexit cliff will rise in British waters. The first fishing campaigns of the year are likely to be dark and bitter for fishermen and shipowners in Brittany, Normandy and northern France. On the other hand, on the plutonium issue, the agreement is perfect and it is the great love without mask between the French Prime Minister and his British counterpart. Coming from Barrow-in-Furness, the Pacific Egret unloaded in Cherbourg on 24 November 2020 “a few hundred grams of plutonium” according to the official press release. Plutonium is the worst waste there is. It comes from the reprocessing of spent nuclear fuel, an obsessive and compulsive practice of which France is both the victim and the propagating agent. France has a stockpile of about 50 tonnes of plutonium under its responsibility, enough to poison the entire northern hemisphere. In the Nagasaki bomb, there were 9 kilos of it. But France still wants more, it is plutovoracious. Orano, the French plutonium wholesaler, wants to take possession of the English stockpile and smoothly incorporate plutonium into the fresh fuels of the world’s nuclear power plants. The Pacific Egret, for the second time, has delivered enough for preliminary tests. 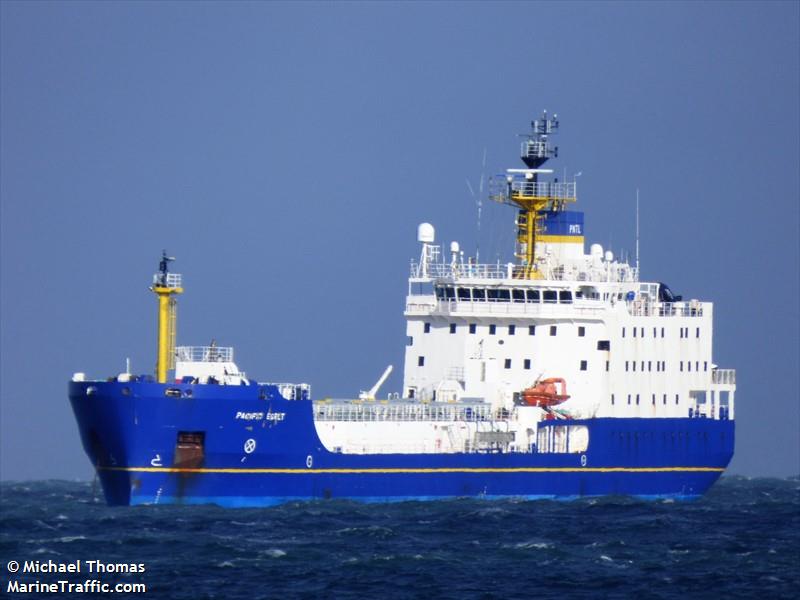 The mystery of Georgios Alexios

At the end of June 2020, the Georgios Alexios loaded 2350 tonnes of polluted soil on the Horror’s wharf, “Quai Citron” in Le Havre (Citron has been the “ International Centre for the Treatment and Recycling of Harmful Waste”). The Georgios Alexios then left in the direction of the North Sea without her final destination being known to this day. The preferred hypothesis is that this polluted soil came from the excavation sites of Greater Paris after transiting through a landfill in the Le Havre industrial zone. To be continued !