The African cherry tree (Prunus africana, also known as African almond) was serving the public interest. It slows down erosion and mudflows on the steep slopes of the mountains of tropical and southern Africa as far as Madagascar. It favours the establishment of ferns and orchids and by the abundance of its seeds and fruits, it contributes to feeding primates and birds such as gorillas, eastern black-and-white colobuses, Bannerman’s turacos and Cameroon greenbulls. Local communities use its leaves and roots to treat various diseases. 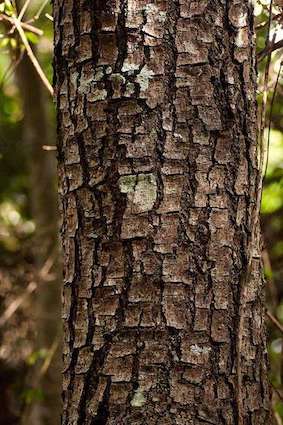 The bark of the African cherry tree
© M. Hyde, B. Wursten, P. Ballings/cc-by-nc

For half a century, the African cherry has fallen into the hands of particular interests.

The pan-African common good has become an annuity for the benefit of the global pharmaceutical industry.

In the absence of legal barriers against biopiracy, the appropriation of the African cherry germinated in France and spread throughout the world. Traditional Zulu medicine attributes healing virtues to the African cherry against urinary incontinence in men, and Dr. Jacques Debat has sniffed at the good bargain. In June 1966, the Debat laboratories filed a patent for a drug supposed to treat benign prostatic hyperplasia, the active principle of which is the bark extract of the African cherry. In 1969, Debat launched Tadenan® on the French and international market, which has since become established in the minds of the medical profession as the saviour of troubled prostates. Fifty years after its launch, on the French market alone, Tadenan® is prescribed around 400,000 times each year despite the very reserved opinions of the French National Authority for Health and the National Agency for the Safety of Medicines and Health Products on its effectiveness. Around the world, some forty pharmaceutical specialities are built on African cherry bark extract and Chinese prostates over 50 years old are starting to take an interest in it. Annual world demand for the bark is approaching 5,000 tonnes. This corresponds to the harvesting of 90,000 to 100,000 trees per year.

The French initiative and its international extensions led to a cultural, social and environmental disaster.

In Cameroon, traditional authorities deplore the misappropriation of a subsistence tree in favour of an uncontrolled and global commercialisation. Sacred forests where village chiefs (the Fons) have been buried have been devastated by the exploitation of African cherries.

The more time passes, the more deadly the trees are debarked with a billhook or even cut down with an axe. Even immature trees that have not yet produced seeds are exploited.

To stop the slaughter, Kenya, one of the range countries, proposed and obtained the listing of the species under Appendix II of CITES, the Convention on International Trade in Endangered Species of Wild Fauna and Flora. As a result, since 1995, international trade has been subject to issuing of export permits by producing countries. Despite the entry into force of this uplisting, the looting of the species has worsened, particularly in Cameroon and Uganda, where local NGOs sounded the alarm in 2014. Trees are being poached in disregard of the instructions issued by exporting countries. These instructions are intended to reassure the authorities of the importing countries, but their application is uncheckable. The main trick is to mix poached bark with “legal” bark. For African cherry barks, the process is similar as for crocodile skins.

In France, Tadenan® and its analogues are the only medicines reimbursable by the Social Security system that contain an active substance derived from a plant species recognised as threatened with extinction. Tadenan® is manufactured in France by Recipharm Fontaine at Fontaine-lès-Dijon as a subcontractor of the American multinational Mylan Medical SAS.
European Union rules and the French Customs Code require all producers and holders to be able to demonstrate the lawfulness of products derived from a species listed in Appendix II of CITES. In order to demonstrate it, it is necessary to have at least the number of the CITES permit authorising the import. However, there is no mention of the Appendix II listing of the African cherry on the patient insert accompanying the Tadenan® and obviously the import permit number is not indicated. In practice, any holder of a box of soft capsules based on an extract of the African tree is, to this day, in violation of the law.

Robin des Bois (Robin Hood) calls upon the European Union to consider the possibilities of listing the African cherry tree in Appendix I of CITES in order to ban its international trade. 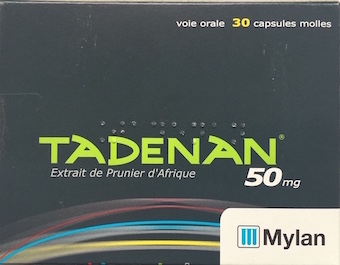