236 meters long. The North Sea Producer, prized possession of Maersk, the number one ship owner in the world, has served the petroleum industry in the North Sea well for 18 years.
This former tanker was launched in 1984 in Denmark under the name Dagmar Maersk and was converted 12 years later into a Floating Production Storage and Offloading (FPSO). It was stationed in the Mc Chulloch oil field north of Aberdeen. The North Sea Producer retired in 2015 on the banks of the Tees next to the shipbreaking site of Able UK in Hartlepool where the former French aircraft carrier Clemenceau was demolished, and from there left Europe under tow. Maersk chose Bangladesh for the end of its life. In the last 9 years, 161 workers have been killed on the beaches of Chittagong. Maersk was not impeded by these facts. What really counts is selling at the best price. The scrappers of Bangladesh offered more than $6 million US for the North Sea Producer. 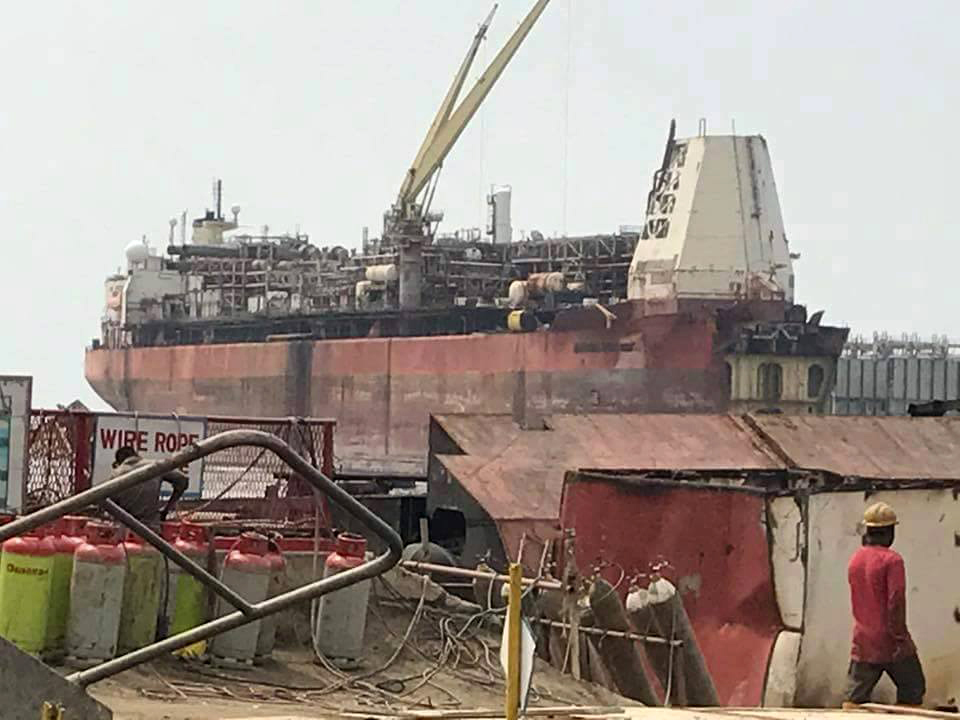 As Robin des Bois published in its quarterly bulletin “Shipbreaking” #47, in its kilometres of pipes the North Sea Producer contains radium scales. Radium is naturally present in the underwater substratum, the exploitation of gas and oil concentrates the radium in the pipes and tanks. Radium scales are highly toxic through inhalation and contact. For example, during the maintenance and dismantlement of the Lacq gas field in France, Total Production produced more than 2000 tons of metal contaminated by Technologically Enhanced Naturally Occurring Radioactive Material. The official destination of this waste was the Soulaines storage center in Aube department under the responsibility of ANDRA, the National Agency for the Management of Radioactive Waste. Norway exploits a storage center for radioactive residuals from the petroleum offshore industry.

June 8 2017, the High Court of Justice of Bangladesh called upon the Atomic Energy Regulatory Authority Commission and the Atomic Energy Commission to produce within 10 weeks a report on Natural Occurring Radioactive Materials in the pipes and the heart of the North Sea Producer. The Court also wishes to know why the seller did not provide all of the information on the risks of dismantling and why he did not nominate and pay experts to guarantee health and safety throughout the operation.

It is true that Maersk only took in this regard the legal precautions. It is the ghost company Conquistador Shipping Company registered at Saint-Kitts-Nevis that officially delivered the North Sea Producer to the shipbreakers of Chittagong. The honour of Europe is safe as during its voyage to the other side of the globe somewhere between Middlesbrough and Bangladesh, the British flag was replaced by that of Liberia.

Whereas the dismantlement of oil and gas platforms in the North Sea are the object of many contracts in the United Kingdom and in the Netherlands, it is urgent that procedures including the description of extraction of contaminated equipment are imposed on owners prior to the dismantling of drilling platforms, of Floating Production Storage and Offloading units (FPSO) and Floating Storage Units (FSU).

In March 2017, 6 technicians worked on the removal of pipes contaminated by radium on the old Thistle platform, near the Shetland islands and came into contact with radium particles without being informed of the risks and without the necessary protective equipment. The English union Unite, that includes most workers of the offshore industry in the North Sea, is suing.