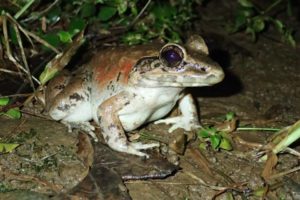 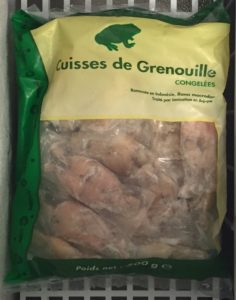 Munich/Paris/Brussels, 23 June 2022. The new report “Deadly Dish” by the non-profit organisations Pro Wildlife (Germany) and Robin des Bois (France) reveals the extent and negative ecological impact of the EU’s millions of frogs’ legs imports. The EU imports about 4070 tonnes of frogs’ legs per year, equivalent to about 81 to 200 million frogs – the vast majority of which are captured from the wild. This increasingly threatens frog populations in the supplier countries Indonesia, Turkey, and Albania. The EU is by far the world’s largest importer of frogs’ legs, and large-legged species such as the crab-eating frog (Fejervarya cancrivora) and the East Asian frog (Hoplobatrachus rugulosus) are in particular demand among supposed gourmets in Europe.

The ongoing overexploitation of frog stocks for the EU market over decades has had dramatic consequences: “In the 1980s, India and Bangladesh were the first to supply frogs’ legs to Europe, but since the 1990s, Indonesia has taken over as the largest supplier. In the Southeast Asian country, as now also in Turkey and Albania, large frog species are dwindling in the wild, one after the other, causing a fatal domino effect for species conservation,” says Dr Sandra Altherr, co-founder of the Munich-based organisation Pro Wildlife. An effect that not only affects the frogs themselves: “Frogs have a central role in the ecosystem as insect killers – and where frogs disappear, the use of toxic pesticides is increasing. Hence, the frogs’ legs trade has direct consequences not only for the frogs themselves, but for biodiversity and ecosystem health as a whole,” emphasizes Charlotte Nithart, President of the Paris-based organisation Robin des Bois.

An earlier study by Pro Wildlife examined the EU’s frog leg imports for the first time already in 2011. The new report “Deadly Dish”, which has now been published, shows three problems frighteningly clearly:

1 – The large-scale plundering of frog stocks for the EU market has continued in Indonesia over the last decade. More than 30 million kg of frogs’ legs were imported by the EU from Indonesia alone in the period 2010-2019. The giant Javan frog (Limnonectes macrodon) is labelled on packages even though Indonesia no longer issues an export quota for this species. Consumers are being misled.

2 – Overexploitation is now driving frog populations in other countries to the brink of extinction: Field scientists from Turkey warn that native water frogs could be extinct by 2032 if overexploitation of populations in the wild will continue. And in Albania, the EU’s fourth largest supplier of frogs’ legs, the Scutari water frog (Pelophylax shqipericus), among others, is now threatened.

3 – While the USA also imports huge quantities of frogs for consumption, these are mainly frogs raised in farms specifically for the trade. Unlike the US, the EU imports mostly wild-caught frogs – and herewith risks an ecological disaster. About 74% of EU imports come from Indonesia, 4% from Turkey and 0.7% from Albania, where wild frog populations are increasingly threatened.

The NGOs Pro Wildlife and Robin des Bois are calling on EU member states – in particular Belgium, and France – in cooperation with exporting countries, to ensure the traceability of the frogs’ legs market, to control the information provided to consumers and develop listing proposals of frog species threatened with overexploitation in the appendices of CITES, the Convention on International Trade in Endangered Species of Wild Fauna and Flora.

Pro Wildlife is a charity that works globally to protect wildlife and their habitats. Pro Wildlife works worldwide to improve laws for the protection of wildlife and their habitats. We take part in conferences such as the International Whaling Commission (IWC) and the Washington Convention on International Trade in Endangered Species of Wild Fauna and Flora (CITES) and are in close contact with other organisations and governments worldwide. We highlight abuses and inform the media, consumers and politicians about current developments in wildlife and nature conservation. On the ground, we support species and animal conservation projects in numerous countries – be it to rescue victims of poaching and wildlife trafficking, to protect wildlife habitats, to prevent poaching or to educate the local population.

Robin des Bois is a non-profit NGO founded in 1985. It’s objective is the protection of Man and the Environment through research and non-violent action. Robin des Bois carries out field investigations and regularly participates in a dozen institutional consultation groups and international conventions. Since 1988, it was granted observer status at the Convention on International Trade in Endangered Species of Wild Fauna and Flora (CITES) and the International Whaling Commission (IWC). Since 2013, Robin des Bois has published an information and analysis bulletin on animal poaching and smuggling (“A la Trace” in French, “On the Trail” in English), a useful tool for institutions and NGOs fighting wildlife crime around the world.