The grounding of the Rena in New Zealand

The grounding of the Rena on October 5th and the subsequent inability of the ship-owner and New Zealand maritime authority’s to free the vessel, to stop the fuel from leaking and to avoid the loss of containers foreshadow big future disasters in the field of container shipping.

To date, the small world of container ships has already drawn attention because of a number of major accidents:

The MSC Carla split into two off the Azores in November 1997, the same month and year the MSC Rosa M, after breaking down in the Baie de Seine, was rescued and towed at the last minute to the Port of Cherbourg. In 2006, the Rokia Delmas ran aground on the Southern coast of the Isle of Ré. In January 2007 it was the turn of the MSC Napoli to be in trouble in the Channel before she was stranded in Lyme Bay, Great Britain.

Fires which spread from one container to another and release for days on end toxic soot and toxic smoke are very difficult to bring under control even with outside help. Clear illustrations of this issue includes in November 2002 the Hanjin Pennsylvania in the Indian Ocean, in March 2006 the Hyundai Fortune in the Gulf of Aden, and the Charlotte Maersk in the Malacca Strait in July 2010.

Compared to the largest container ships to come, the grounding of the Rena on the Astrolabe reef (1), carrying according to the ship owner’s declaration 1,351 containers and 1,700 tons of fuel, is just a sneak preview. However, one has to add the oil spill damage, the drift and dislocation of lost containers which are going to create problems for navigation safety, fishing activities, as well as spread countless waste, harmful to marine life. The removal of the containers from the holds of the ship, the dismantling and the final assessment of pollution and other impacts will take years. Approaching the Australian port of Cairns, the container ship Bunga Teratai Segu ran aground on a coral reef in November 2000, all pollutants were taken into consideration, including the particles of paint containing TBTs which came off during the grounding. After the clean-up, the Australian Government recommended a monitoring period of 10 years.

It is urgent that the International Maritime Organization and all the other stakeholders impose new rules and precautionary measures to the container ships builders, owners, and crews.
(1) Dumont d’Urville, the French discoverer of the Antarctic, named the reef after his ship L’Astrolabe nearly ran aground on it in 1827.
Sources : Cedre – Centre of Documentation, Research and Experimentation on Accidental Water Pollution – and Robin des Bois 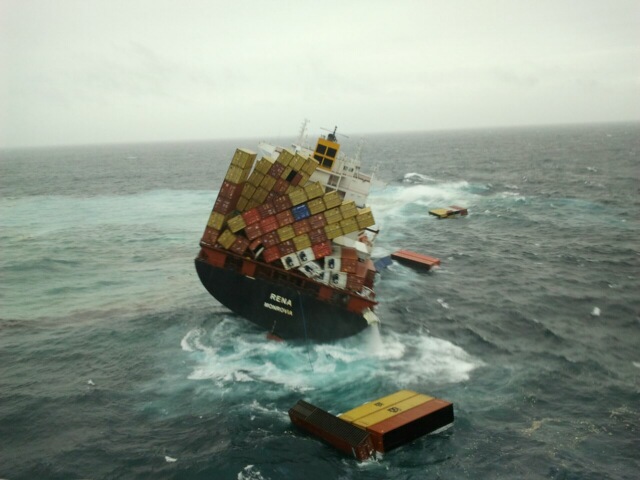 The Rena lodged on the Astrolabe reef – © Maritime New Zealand.