Update June 18, 2021
The Christos XXIV returned to sea on Tuesday 15 June at 5pm heading to Las Palmas (Canary Islands, Spain). The 50 year old tug, her 8 Filipino sailors and her 2 Greek officers stayed in Le Havre for 1 month and 8 days.
The Christos XXIV left alone, leaving the Varzuga at Joannès Couvert wharf. Discussions are still ongoing between the owner of the old Russian ship, the maritime authorities and a French demolition yard. The Varzuga will have to be accompanied in the demolition yard by her green passport, which she lacked when she left Murmansk. The green passport is a map with an estimate of the quantities of hazardous materials on the ship at the end of her life.
The Varzuga’s detention should end within 10-15 days. 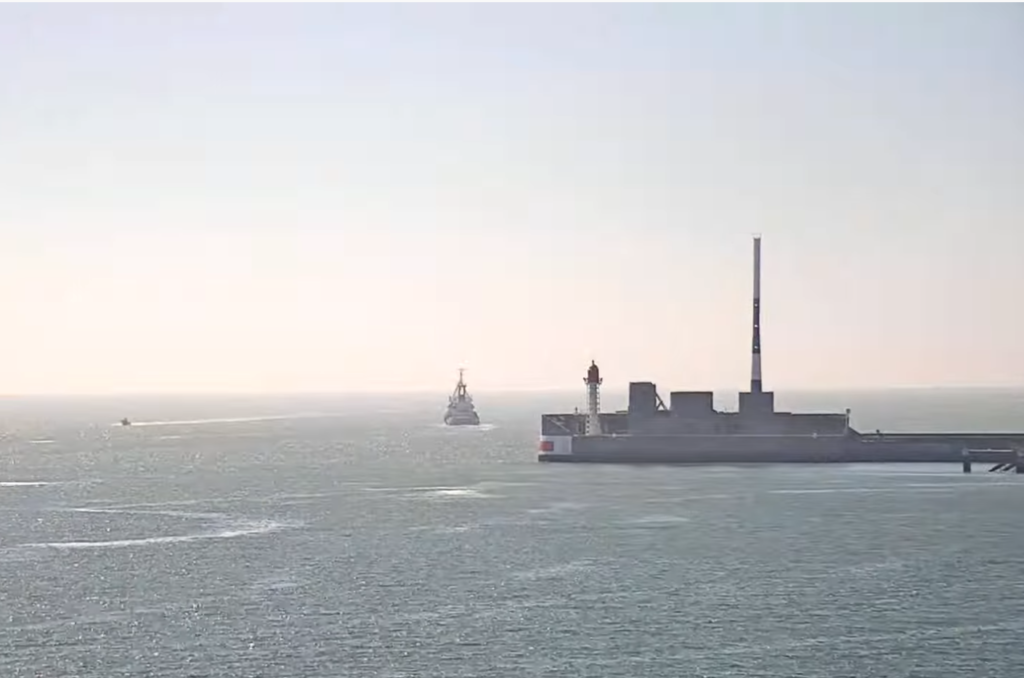 The port of Le Havre is facing a scenario that even the comic strip Tramp did not imagine. 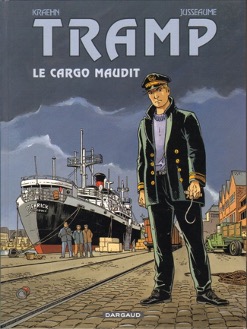 The tug Christos XXIV is towing the former Russian oil tanker Varzuga from Murmansk in the Arctic to a shipbreaking yard in Turkey. Off Cherbourg, the tow rope breaks. The Varzuga drifts away. She is brought under control thanks to the intervention of the assisting and salvage tug Abeille Liberté mobilised by the Maritime Prefecture. 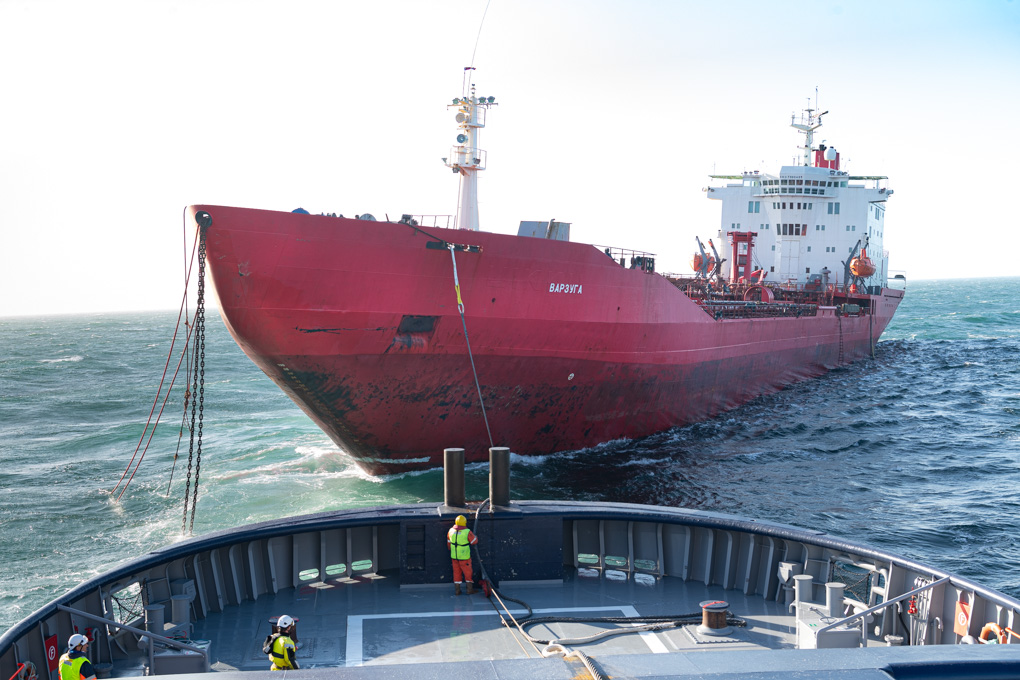 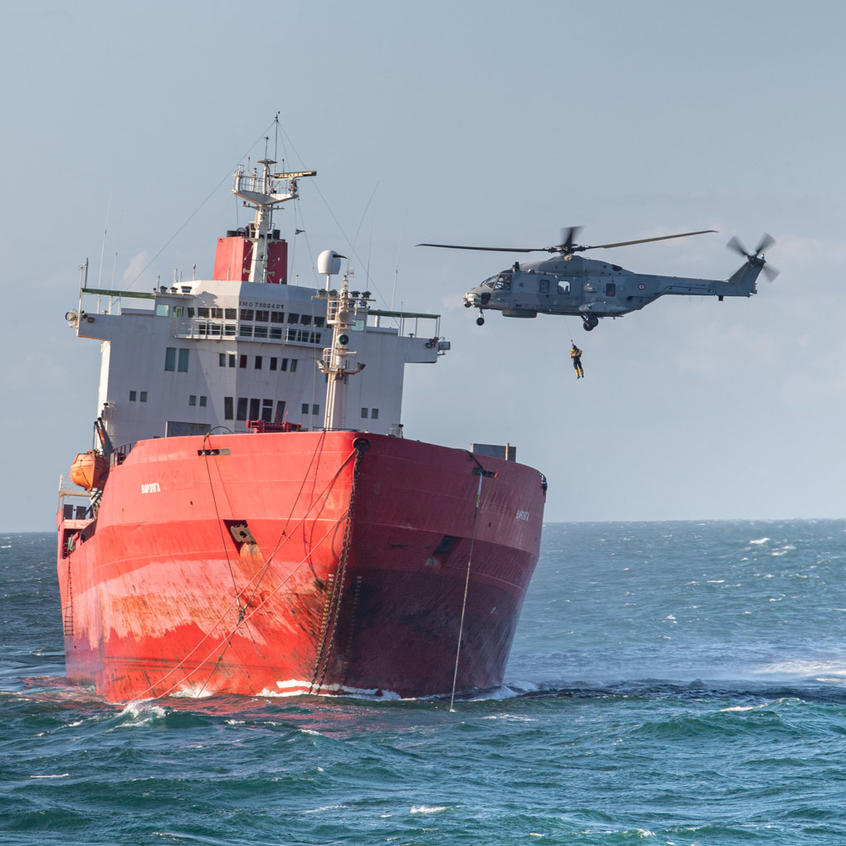 The Varzuga is towed to the area of refuge of the Bay of Seine. The Christos XXIV re-fastens her tow. Under the supervision of the Abeille Liberté and with the assistance of harbour tugboats and a pilot, the convoy reaches the port of Le Havre on May 7, 2021. 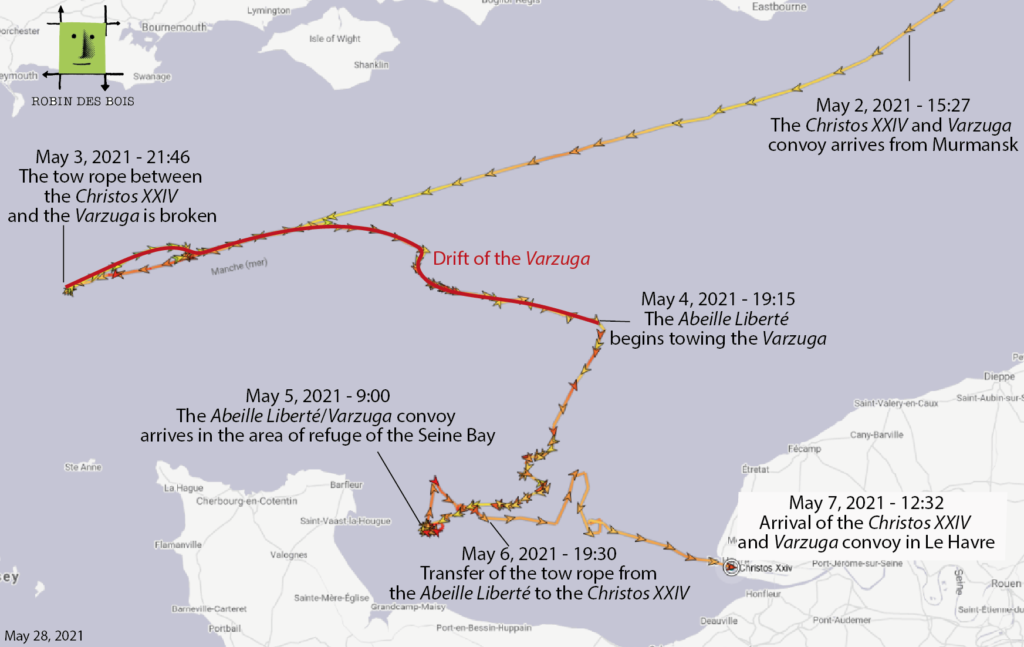 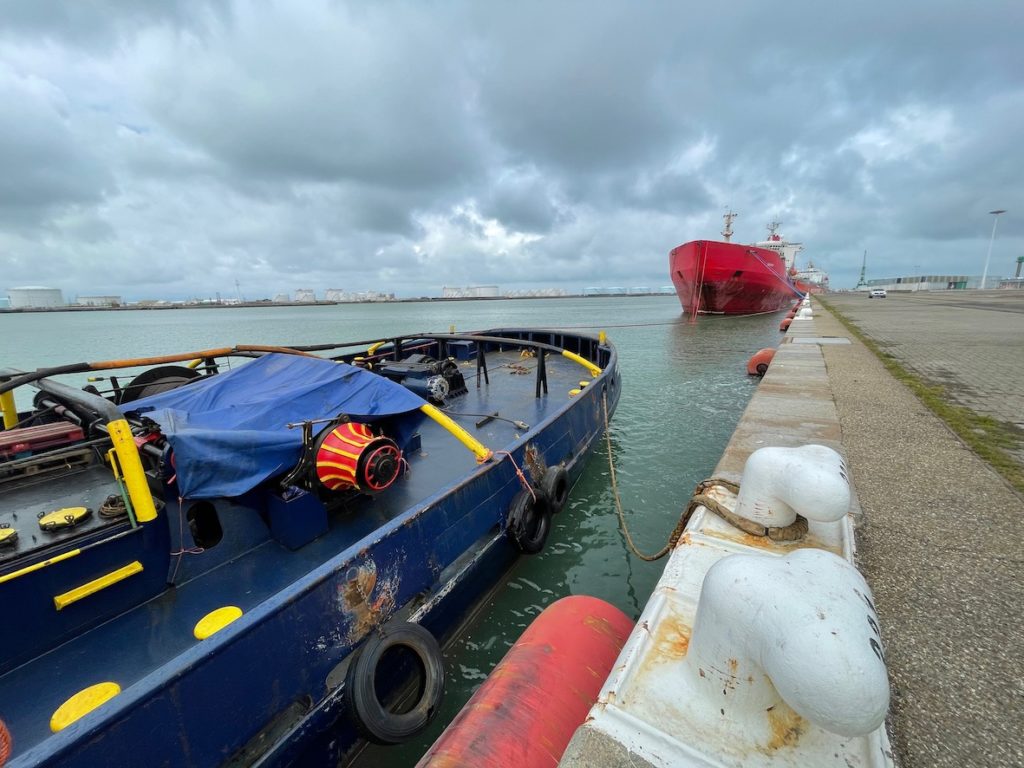 Today, the Christos XXIV and the Varzuga remain rooted to the wharf. They are immobilised because of financial disputes. The Christos XXIV is subject to cross seizures, in particular by the owner of the Abeille Liberté or her charterer the French Navy, the Le Havre consignee Humann & Taconet, but also by the owner of the Varzuga‘s hull, a Russian trader, no doubt one of those who look for end-of-life vessels in ports all over the world, in other words, a wreck hunter in connection with shipbreaking yards. 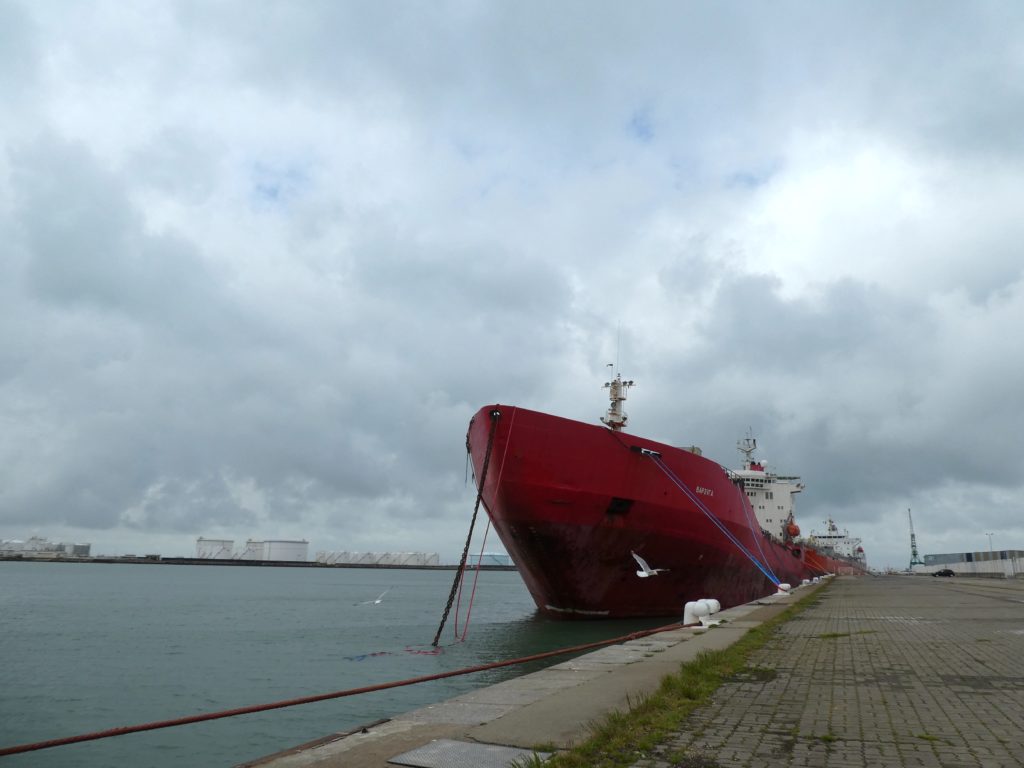 The Varzuga is also subject to a seizure by the Dutch (or Russian) owner of the Mustang, another tug who came at the express request of the owner of the Christos XXIV to support the convoy’s operations. The Mustang joined the convoy when it was in the vicinity of the area of refuge of the Bay of Seine on May 5. She left the area when the oil tanks of Le Havre were in sight. 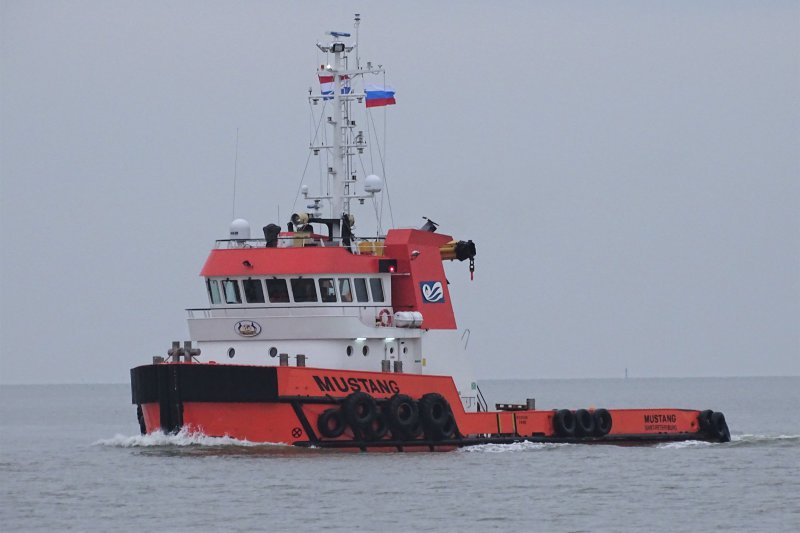 The Mustang at Eemshaven in the Netherlands, January 16, 2021 © Frits Olinga

The Christos XXIV belonging to the Greek group Spanopoulos based in Salamis flies the Panama flag. Her two officers are Greek. Eight sailors are Filipinos. If the situation of the Christos XXIV gets bogged down in Le Havre, these eight expatriates will be at risk of not being paid and being abandoned. 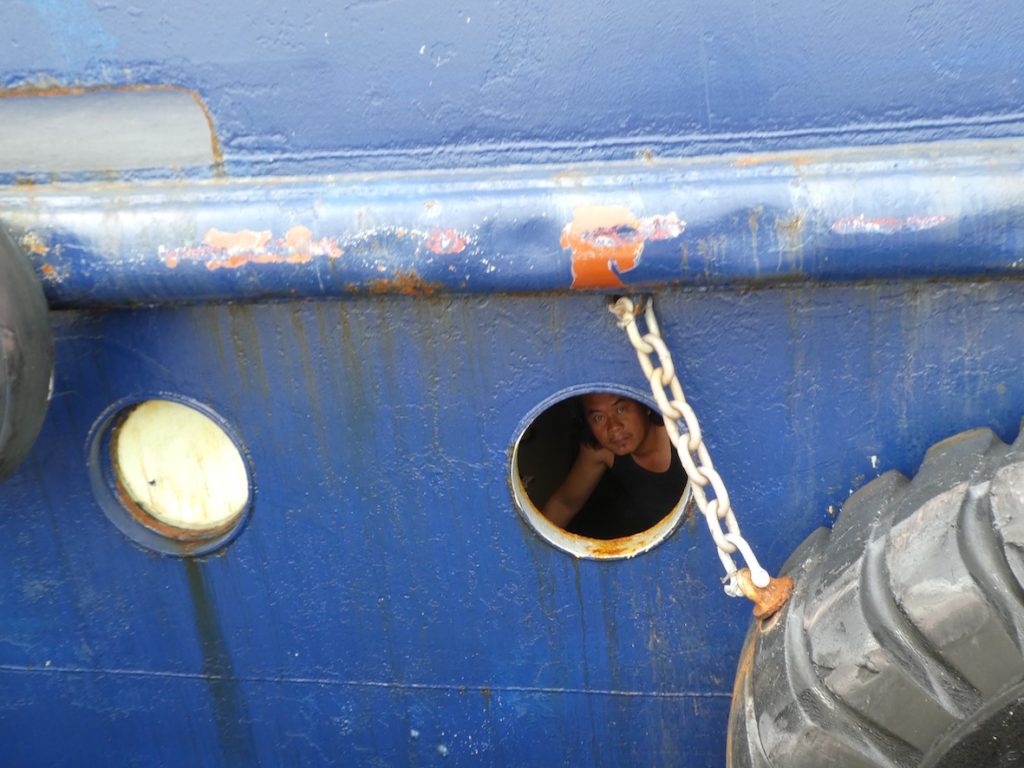 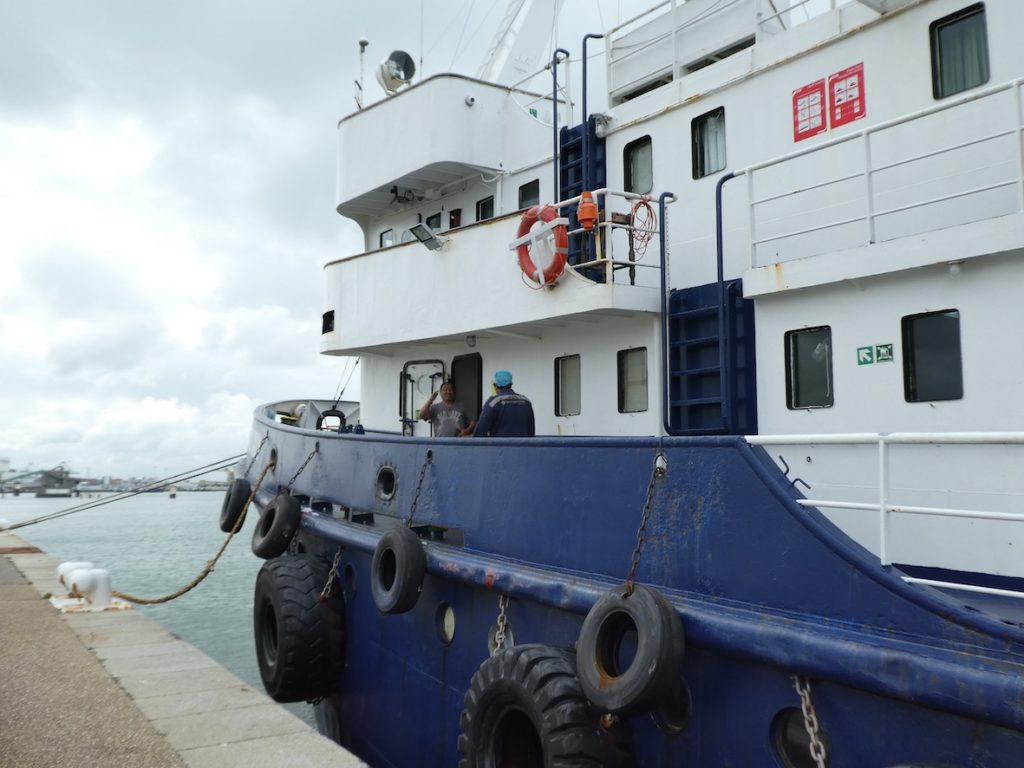 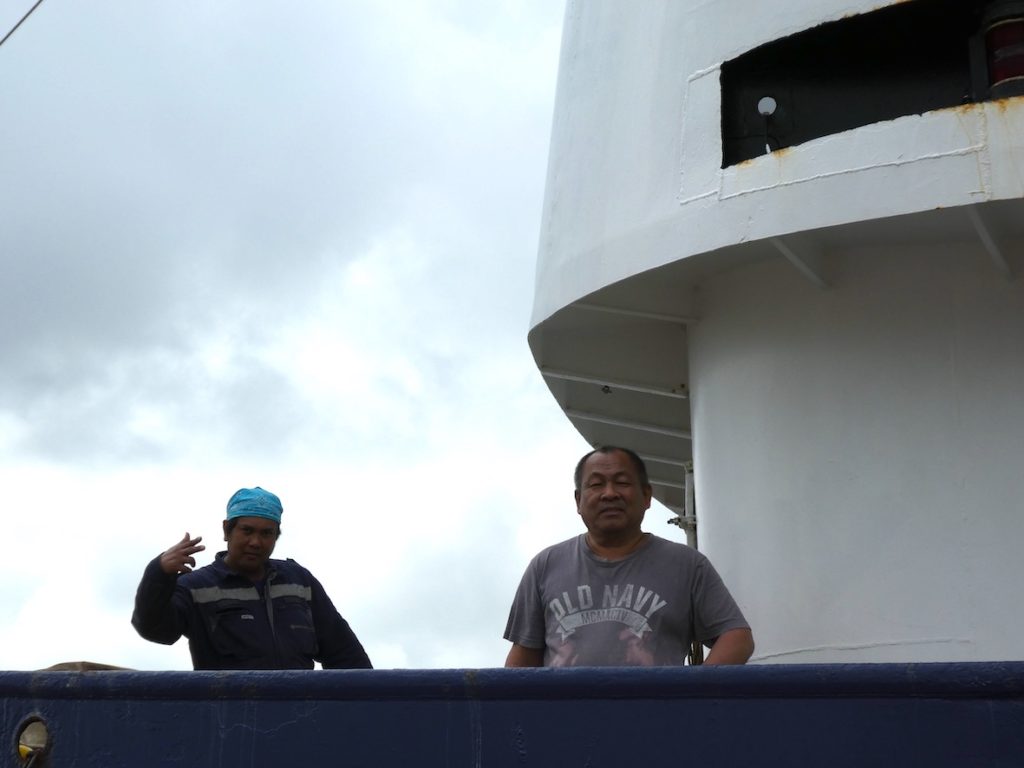 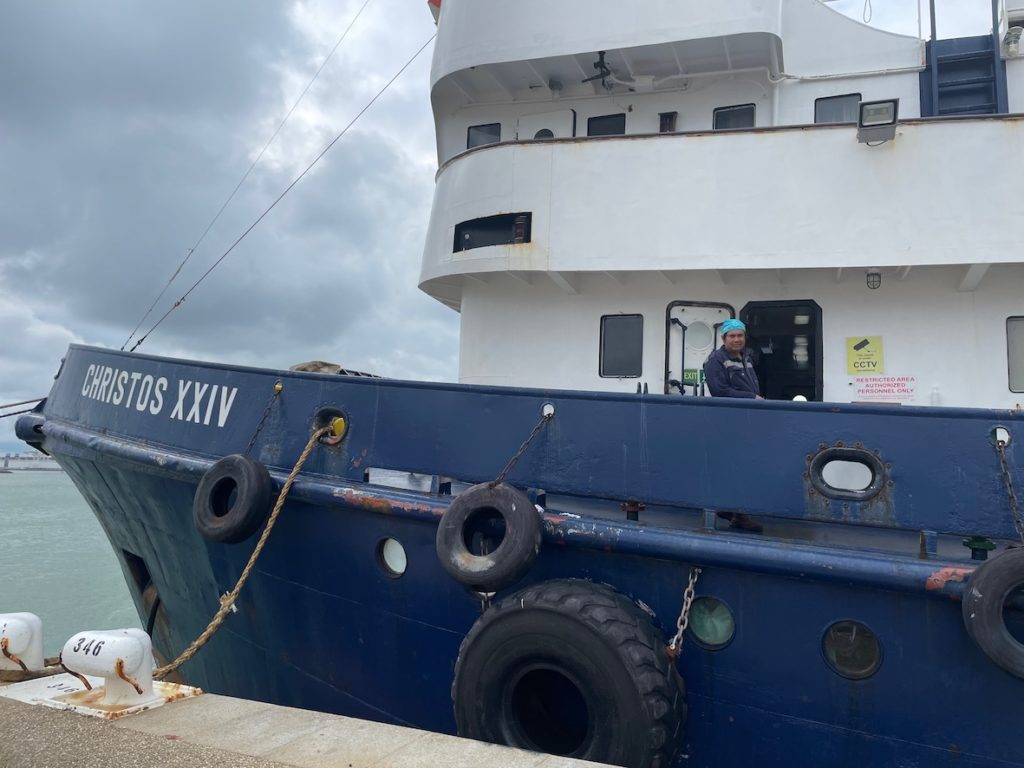 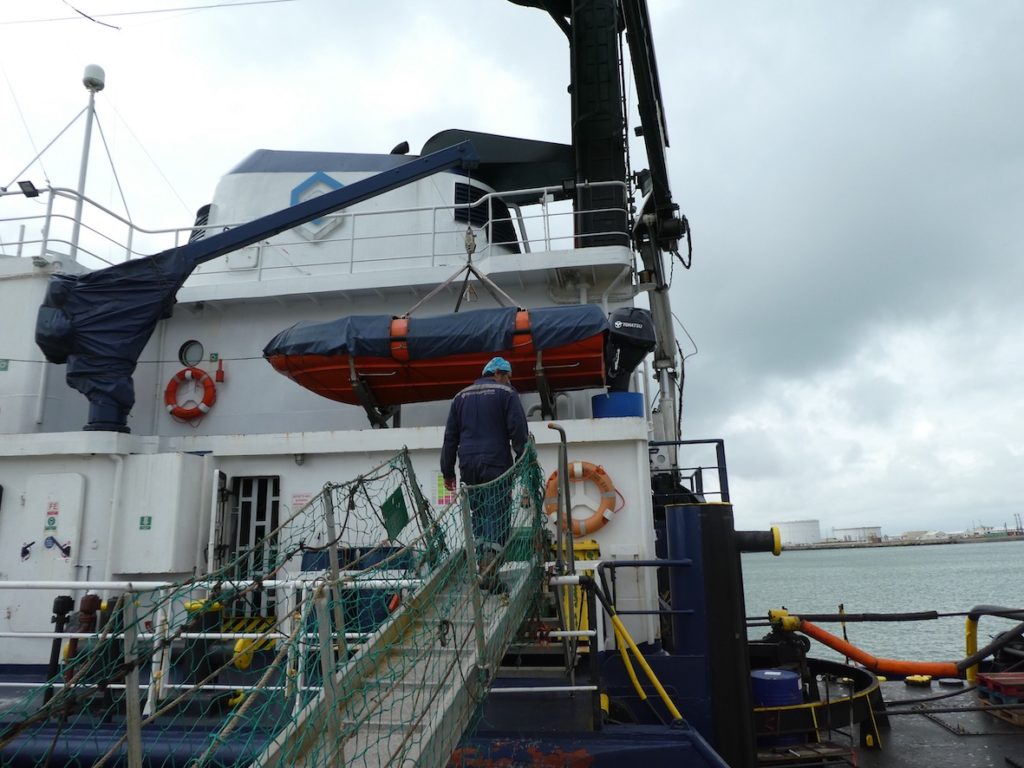 The Varzuga was formerly known as the Uikku and the hull is still bearing the marks. The Uikku, built in 1977 in West Germany for a Finnish shipowner, was bought in July 2003 by the Murmansk Shipping Co. and was named Varzuga after a river in the Murmansk oblast. From this point on, she is dedicated to oil shipping to supply civilian and military ports in the Russian Arctic. In March 2019, she becomes under the control of the Arkhangelsk-based JSC Bunker Company. 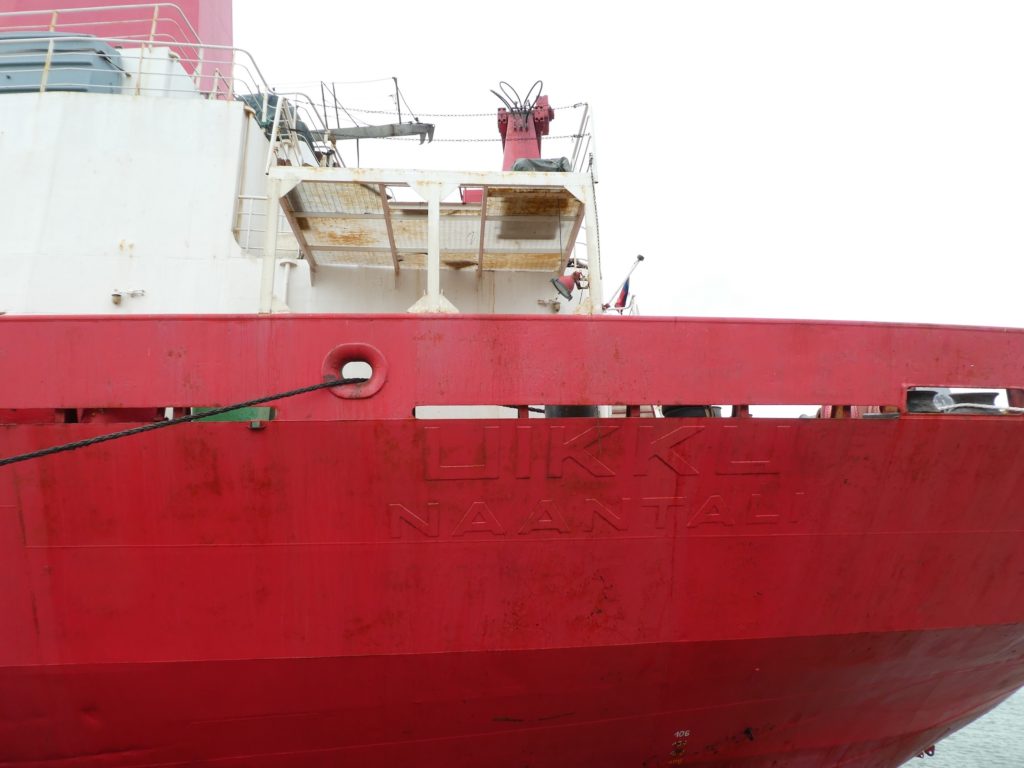 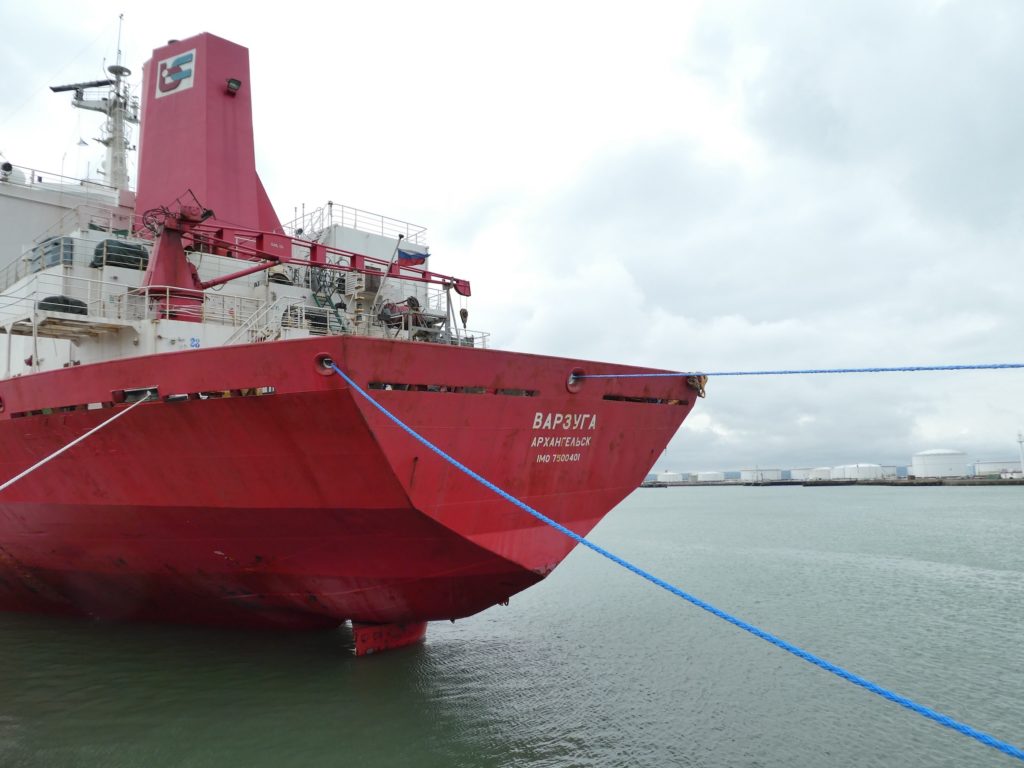 On March 29, 2020, she suffers a propulsion breakdown and is towed between the Ob estuary and Murmansk by the nuclear icebreaker Vaigach. The Varzuga cannot be repaired. She is 44 years old. The average age of oil tankers who are scrapped today is 29 years. 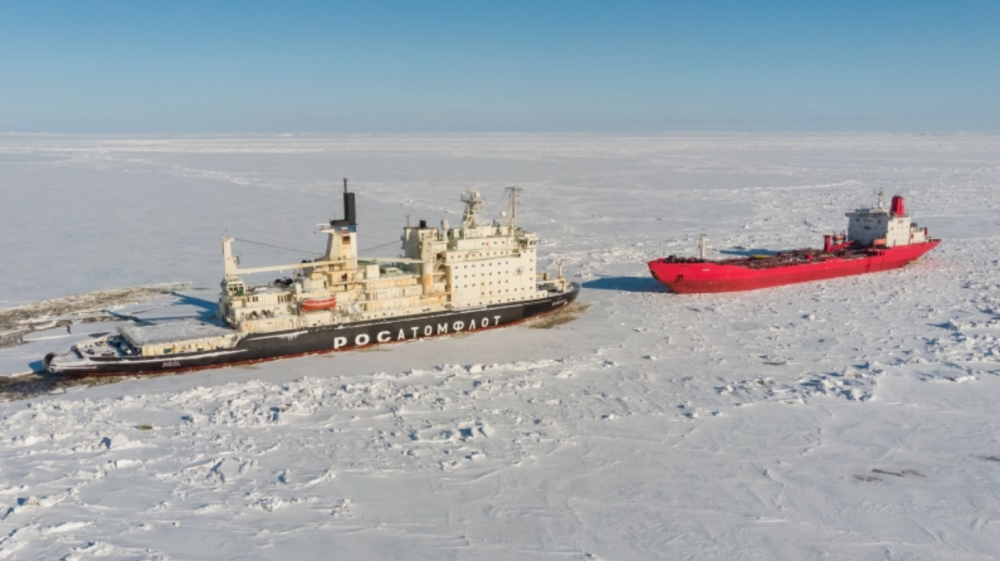 What future for the Christos XXIV? At 50 years old, she is under-equipped to convey cargo ships the size of the Varzuga on trans-oceanic routes. Her owner seems to be in financial difficulties, judging by the debts accumulated since the failure of the towing of the Varzuga. 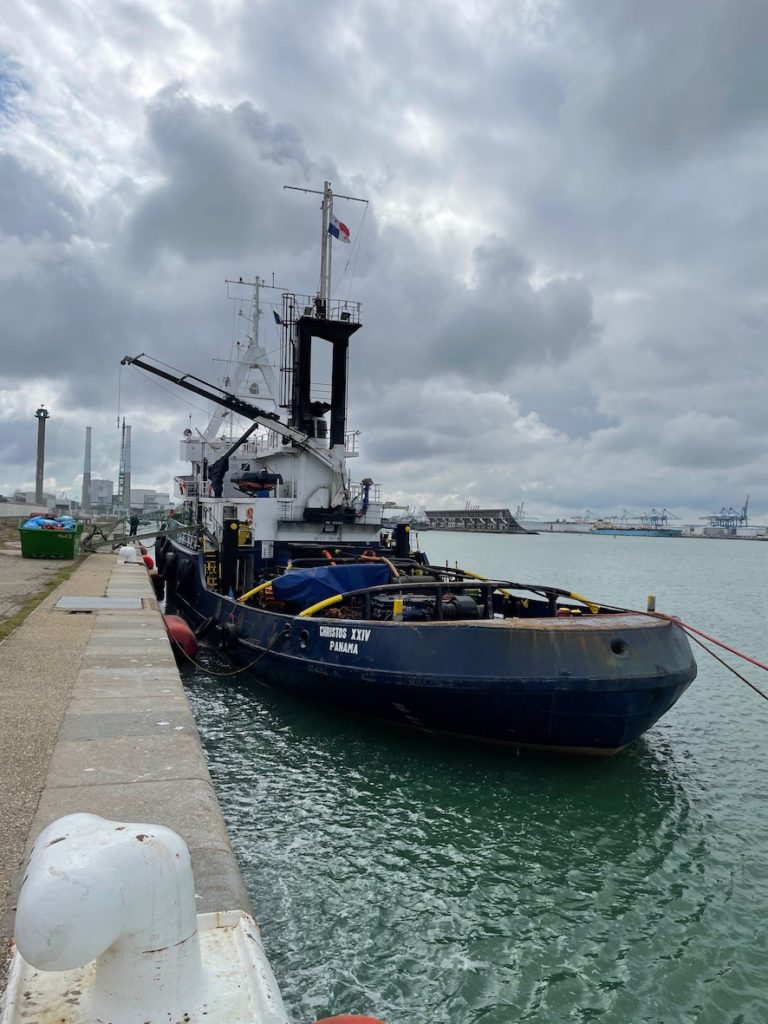 What future for the Varzuga? She seems a little too long to be scrapped in the yard of Gardet & De Bezenac (subsidiary of Baudelet) approved by the European Union, whose workload is already full with hulls of the French Navy. The destruction is done afloat. There would be risks of oil spills. She could possibly be scrapped by the Recycleurs Bretons/Navaleo approved yard in Brest provided that a dry dock and an inventory of all hydrocarbons and other ship-generated waste in the Russian Arctic are available. 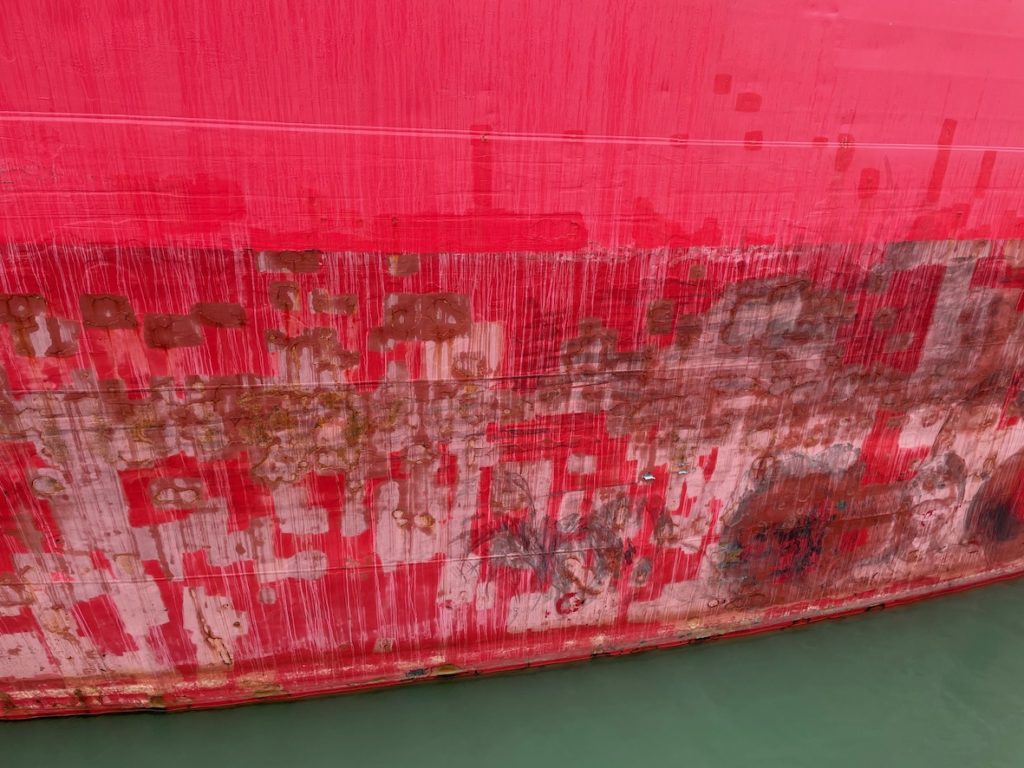 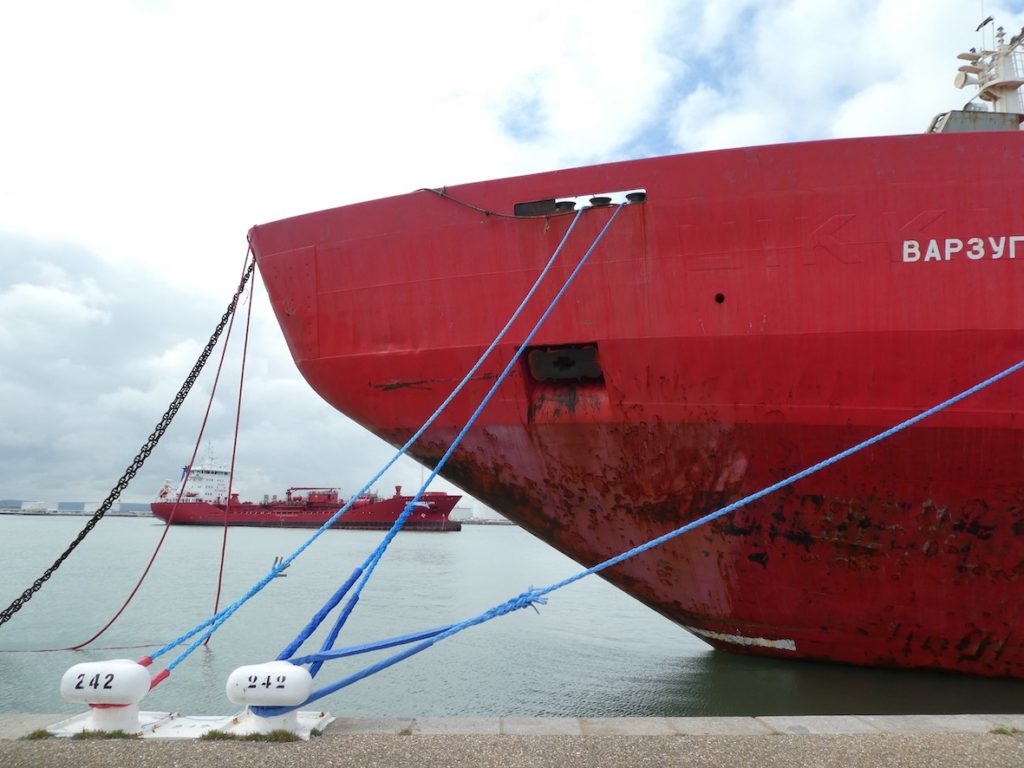 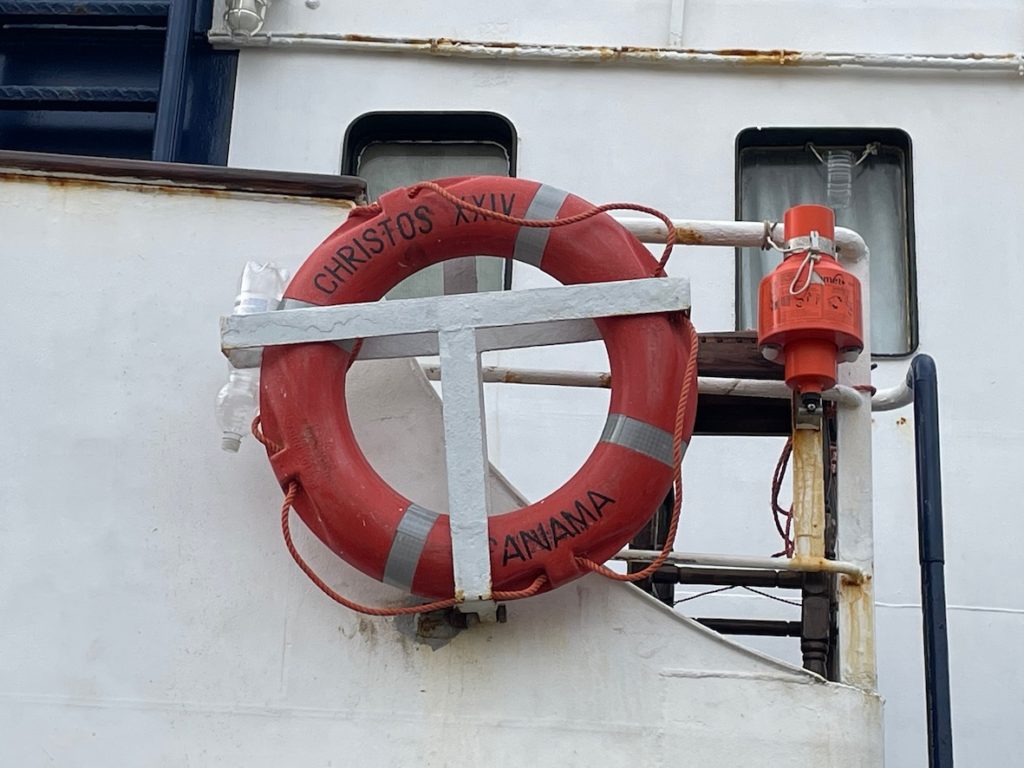