Animal species are extinguished. The plenary of CITES (Convention on International Trade in Endangered Species of Wild Fauna and Flora) in Bangkok was the opportunity to bury, without ceremony, the Thylacinus cynocephalus and some other species wiped off the planet in the past century. Their family trees date back several million years. Extinctions are accelerating.

These biological disasters are not caused by any disruptions in climate, geological mutations or functional inadequacies. Mankind is the conductor of these disasters, wreaking havoc through risky manipulations or introductions and through radical exploitation of its surroundings.

The Thylacinus cynocephalus, also known as the Tasmanian Tiger, the Tasmanian wolf, the marsupial wolf and the zebra opossum, was not a Canidae but a marsupial able to carry 2-4 cubs in its pouch.

The species was known, if not common, on the Australian continent. Cave drawings of thylacine dating back thousands of years are part of Australian rock art and are preserved in both the northern and southern part of the country. It would have been decimated in the aftermath of colonization by European immigrants in the late 18th century. 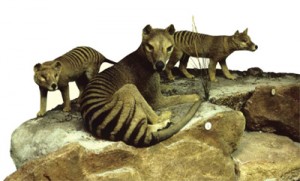 The sub-population of Tasmania has resisted longer despite its bad reputation. Thylacines were considered killers of lambs and other farm animals or livestock. A good thylacine was a dead thylacine. Each carcass brought to the administration or to large landowners was subject to a reward. Biologists believe that this reputation was not justified and that small wild mammals, marsupials and rabbits were introduced into the normal diets of settlers for some time.

Added to this intolerance, Thylacines were probably also victims of fashion. The skins were tanned and sent to London, where they were transformed into waistcoats under the pompous and misleading name of Tasmanian Tiger.

The last identified living specimen was captured in 1933. It died of boredom at Hobart Zoo after 3 years. It was then that the Thylacinus cynocephalus received regulatory protection. The species already had all the clinical signs of extinction.

From time to time, supposed traces or observations of the Thylacines make the Tasmanian headlines but are attributed to confusion or fraud.

In children’s books, animal species have a tough life. Edited by Hachette in 1971, the encyclopedia of Oceania animals presents the thylacines as a living and respected species with a beautiful coat striped like a zebra or tiger. “Nowadays we inflict a fine of 5,000 francs to whoever kills a Tasmanian wolf when we would have given him a reward a few years ago.” The same goes for The Living World, published by Time Life: its revised 1972 edition says that the future of the species is not threatened in the immediate future since a large number of thylacines were being protected forest reserves of Tasmania. In fact, Thylacines lived in the plains and hills or on the edge of dense forests.

How long after their extinction in forests, savannahs and wetlands will elephants and rhinoceroses continue to survive in children’s books?