The decision to put to death two Asian elephants from the Golden Head Zoo (zoo de la Tête d’Or) in Lyon, France, would be tainted with illegality and cruelty.

Cruelty
Each year, thousands of elephants are put to death in Africa and Asia as a result of illegal ivory trade and the regression of their natural habitats. The execution of these two elephants, aged 42 and 43, can be added to that number. These elephants have reached a very respectable age for the elephantine species; only a small number of specimens in the wild have in this period the chance to grow as old.

Illegality
No French or European regulation explicitly addresses tuberculosis in wildlife. However, the decisions made in the wake of tuberculosis cases in a zoo depend on cooperation between health authorities, veterinarians and the manager concerned, in this case the City of Lyon.

The Golden Head Zoo in Lyon was created in 1856. It covers 8 hectares. Lyon has recently adopted a “blueprint for the zoo’s garden.” The collaboration with the National Veterinary School of Lyon is, according to the park’s website, historic.

Accordingly, Robin des Bois requests the Rhone prefect, the Minister for Agriculture and the Mayor of Lyon to officially renounce the poisoning of the two venerable elephants and calls for strict veterinary care and vigilance so that tuberculosis is controlled in the Golden Head Zoo. 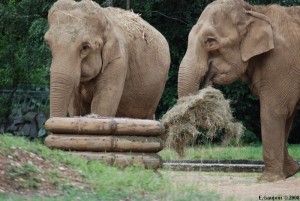