On Friday, December 18, at 15:40, the atomic ship Sevmorput on her way to the European continent suddenly changes her course towards the Moroccan coast. The next day, Saturday 19th in the morning, she resumed her course northwards. But late this Saturday afternoon, she headed back again for the Moroccan coast. This uncertain path reflects the embarrassment of the Russian shipowner Rosatom and the failure of talks with Morocco, Spain and the United Kingdom (Gibraltar) likely to accomodate the ship in distress in a port or a place of refuge.

Today, Monday, December 21, at 7:00 am, the Sevmorput is definitively returning to Saint Petersburg. She is off Lisbon. The European Union is unable to impose and coordinate a plan to escort or tow the ship throughout her loaded return journey. The European Commission’s two responses to the NGO Robin des Bois (Robin Hood) show that the technical difficulties faced by the Sevmorput are underestimated (see below). The European Union is satisfied with an observer role. 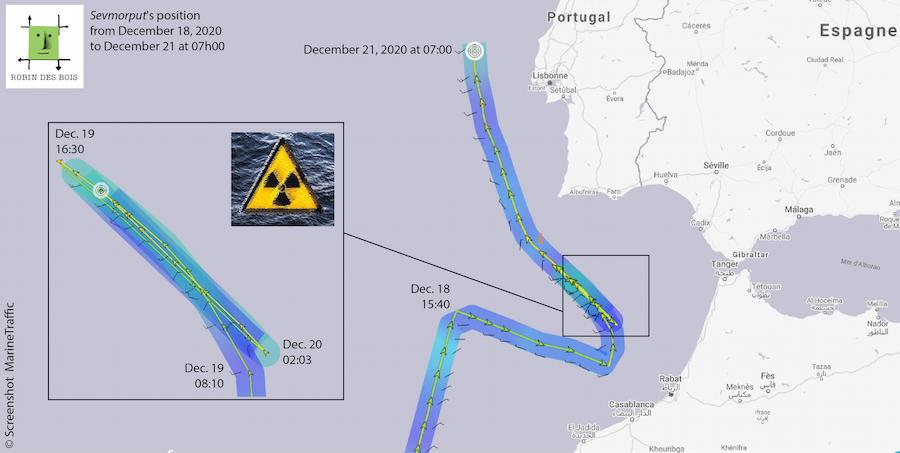 The Sevmorput, unlike the Russian nuclear-powered icebreakers operating in the Arctic, which have 3 propellers, is normally equipped with a single 4-blades propeller. Today she has lost two. This is why her speed has been halved. As a reminder, the ship’s propeller and propeller shaft were replaced in a shipyard in St Petersburg a few months ago.

The only port of refuge still available before the perilous crossing of the Bay of Biscay is the Spanish port of A Coruña tomorrow morning. After that, she will take the plunge. At this stage, Robin des Bois does not know if the “Biscay Plan” for French-Spanish cooperation is pre-positioned to provide assistance to the Sevmorput which, in addition to her 135 MW nuclear reactor, carries 97 crew members and technicians. The “Biscay Plan” was updated a year ago. It lays down the arrangements for joint intervention between the SASEMAR (Sociedad de Salvamento Marítimo y Seguridad Marítima) and the French Atlantic Maritime Prefecture in the case of salvage and pollution response operations. Only three sea-going tugs, including the Abeille Bourbon based in Brest, can be mobilised. Weather conditions are expected to be rough in the Bay of Biscay this week and simultaneous alerts of cargo ships in distress could be issued.

After the Bay of Biscay, the only three places of refuge for the Sevmorput in the event of additional difficulties would be Brest and Cherbourg roadsteads or the Seine bay.

The NGO Robin des Bois persists in recommending the preventive option of towing, which is preferable to the emergency response option.

The maritime ORSEC plan that the French Atlantic Prefect refers to in his response to Robin des Bois (see below) includes a NUCMAR part. If the radiological consequences of an incident at sea are considered unacceptable by the experts in support of the maritime prefect, the vessel may be towed to the open sea and scuttled. However, theoretically, this NUCMAR plan only apllies to cargo ships carrying class 7 dangerous goods “radioactive materials” and does not take into account the enriched uranium used by the nuclear-powered Sevmorput.

After the English Channel, the disabled ship will have to sail through accident-prone straits with heavy maritime traffic before reaching St Petersburg (see previous press releases). 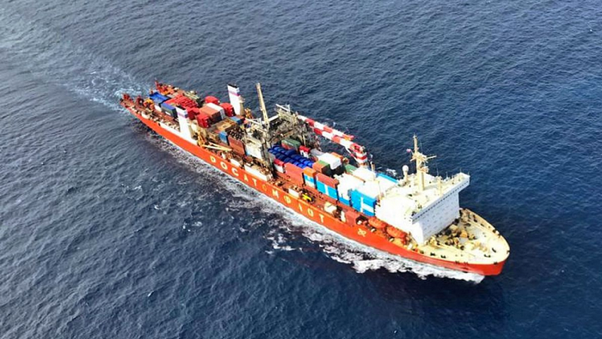 The Sevmorput near the Canary Islands on 16 December 2020. Photo Salvamento Marítimo
Response of the Maritime Prefect for the Atlantic to Robin des Bois received on Friday,18 December 18 2020 at 20:09 (pdf version, in French, click here [1]).
x

In your letter dated 16 December, you drew my attention to the particular situation of the ship SEVMORPUT. This merchant ship is the subject of particular attention on my part in view of the damage to her propeller (according to the information at my disposal). The type of propulsion of this ship, as well as the evacuation of her captain for medical reasons by the Spanish authorities, are furthermore and clearly reasons which reinforce the need to ensure special monitoring of the ship during sailing and more specifically as soon as she enters the Bay of Biscay.

The plan for organising civil protection response at sea for the Atlantic coast (maritime ORSEC) makes it possible to respond to emergency situations at sea. In addition, the deep-sea towing services chartered by the French Navy have the power required to come to the assistance of SEVMORPUT should she represent a danger to the French coast. In addition, we have already approached the shipowner, with whom we have exchanged the necessary contact points in order to deal with any problems as smoothly as possible.

The ship will be monitored under the same conditions by the maritime prefecture for the Channel and the North Sea, which also has an ORSEC plan and adequate means of assistance.

I hope that I answered your legitimate questions and I share with you the urgent need to protect our maritime spaces and our coastline. Sincerely,

New answer from the European Commission to Robin des Bois received on Friday, December 18 2020 at 17:50

Thank you for this new press release. As indicated we are closely monitoring the situation.
There are no indications at this stage that the vessel is in need of assistance despite the technical difficulties it has incurred.
In case the master of the ship is unable to continue its duties, he/she has then to leave command to a senior on the bridge and this normally does not affect operations.