Not far away from the Corse, on a deserted wharf, another ship is waiting for demolition. Methania was said to be already living in borrowed times in 2007, was struck by a lightning in Zeebrugge in 2008, on technical stops or in lay-up at Brest in 2013 and in 2014, and has been berthed at Marseille since mid-December 2014. Works to be carried out at Marseille repair yard were postponed. They were supposed to last for 2 months. Methania’s obsolete equipment, the availability of larger and more fuel-efficient units manned by less crews deprive her of long term or short term chartering.

According to the specialized magazine Tradewinds, the Methania is in the Top 15 of the world’s oldest LNG tankers. She was built in Belgium in 1978. She is managed by Exmar, a Belgian gas shipping company. Exmar operates about 30 ships, among which 14 LNG tankers most of them built since 2000. The Methania is by far the veteran of its fleet. 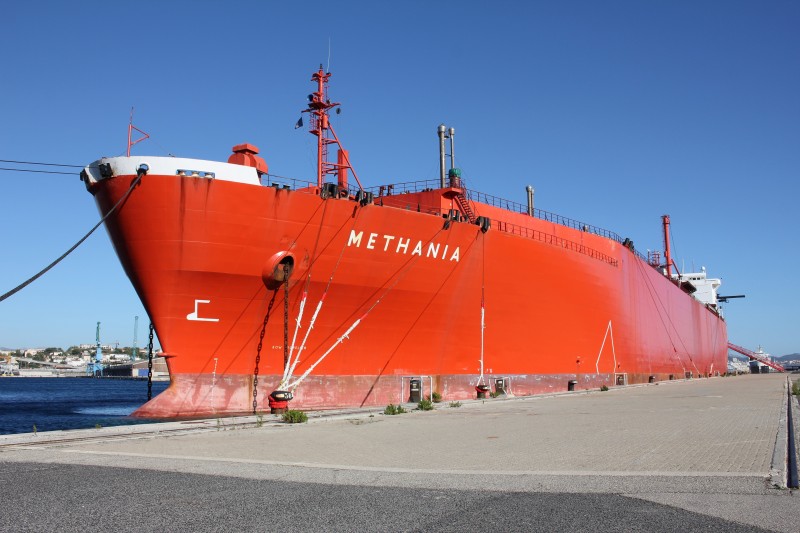 LNG carriers of this generation contain large quantities of asbestos. The green passport of Methania remains to date confidential. Will the Belgian ship move in the wrong direction as the Descartes or in the right one as the Tellier ?

In 2007, the Descartes, built in 1971 at Saint-Nazaire, was decommissioned in Marseille. In a letter to Robin des Bois, her owner Gaz de France confirmed the existence of asbestos on board and affirmed its will to have the ship « dismantled in strict compliance to the existing regulation, especially that related to asbestos » in the case she could not be sold. The Descartes was supposedly sold « for further operation to a renowned Asian shipowner » which had her quickly renamed twice and beached for demolition in Bangladesh.

In 2011, the Tellier, built in 1974 at La Ciotat, was laid up, also decommissioned in Marseille. The French Ministry of Ecology pointed out the use of asbestos in the ship’s structure and expressly asked GDF-Suez « not to plan to send its ship to an Asian shipbreaking yard» as this was « not complying the regulatory frame applying to European vessels ». In July, the ship left Marseille and headed to Le Havre. Gaz de France held on the incertitude regarding her final destination. After several months of expectation at Le Havre and a couple of expressions of interest, the Tellier was finally towed to Galloo Recycling Yards in Ghent, Belgium, in the summer of 2012.

If the assumption regarding the demolition of Methania is confirmed, Belgium – the flag State -, France – the port State – and the European Union will have, considering their ship recycling strategy, to make sure the vessel will head to « a ship recycling facility designed, constructed and operated in a safe and environmentally sound manner, operating from built structures and ensuring safe and environmentally sound management and storage of hazardous materials and waste ». Such facilities are operating or developping within the European Union. Indeed, the EU strategy does not ban ships from being recycled in facilities located in third countries, under the condition the hazardous substances storage, waste management and disposal will be operated in accordance with human health and environmental protection standards « broadly equivalent » to its standards. But there are too many hazardous substances and too much asbestos on board of the Methania to follow this plan B.