Since July 14th 2012 the container ship MSC Flaminia is in distress in the North Atlantic. Her cargo consists of 2,876 containers of which an unknown percentage contains dangerous materials. The lack of information to the public on the vessel’s loads is all the more surprising as she set sail from Charleston in the United States of America where transit conditions and container loading have the reputation of being the strictest in the world since (9/11) September 11, 2001. One of the containers onboard the MSC Flaminia caught fire which resulted in an explosion in the middle of the vessel. The first explosion was followed by a second four days later. The fire spread to at least another two holds as it raged for 9 days. Two sailors are dead (one is missing and the other died from severe burns) and another three are injured. The container ship was abandoned by the crew. The eventual loss of containers at sea is unknown. 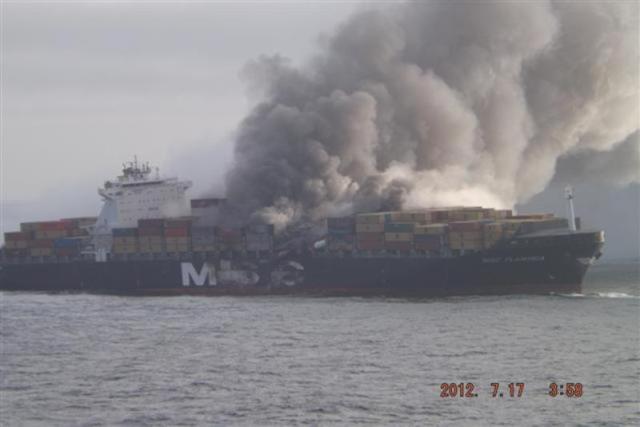 Today the MSC Flaminia is being towed by two specialized tugboats. The convoy was said to have arrived in the North Atlantic waters under the responsibility of the British. In fact, French ports such as Brest, Cherbourg and Le Havre are eventual places of refuge for the MSC Flaminia. To date the French Atlantic and the Channel maritime authorities have not received any demand from the British authorities, from the Mediterranean Shipping Company –MSC– the Swiss charterer, from the ship-owner or from her manager both with headquarters in Germany.

Before authorizing the MSC Flaminia to enter into a European port, experts must ensure that there is no longer a risk of fire or explosion in the containers and that the hull has not been severely damaged by the intense explosions and fires. If these uncertainties are lifted, Robin des Bois is asking that the MSC Flaminia be subject to cooperation between all stakeholders, particularly between the French and British authorities, and that she is received under the best possible conditions with regards to maritime security and the protection of the environment. It is estimated that between 20 to 30% of the content of shipped containers are subject to intentional or unintentional false declarations. Adding to the risk of pollution from the containers the stricken vessel is carrying several thousand tonnes of fuel.