28th August 2019 addendum :
The information very recently circulated by City hall is not reliable. Only the three schools on the rue Saint-Benoît were subjected to a “treatment protocol” carried out by professionals and monitored by health and safety inspection. In the other schools, City hall mentions “treatment” of “ongoing works”, “intervention”, “cleaning”, “measures to be undertaken”. City hall does not clarify when these operations are going to be executed nor by whom. No decontamination report is available. As a reminder, contamination reports are still available on https://www.paris.fr/pages/incendie-de-notre-dame-l-essentiel-concernant-la-pollution-au-plomb-7028/ [1] (at the bottom of the page).

The lead samples and analyses in the polluted schools were carried out between the 13th of May and the 8th of August 2019, following the Notre-Dame fire. Primary schools and public secondary schools (collèges) are managed by City hall, public high schools (lycées) by the Île-de-France region. Private schools are managed by the OGEC (the management organisation for catholic teaching). 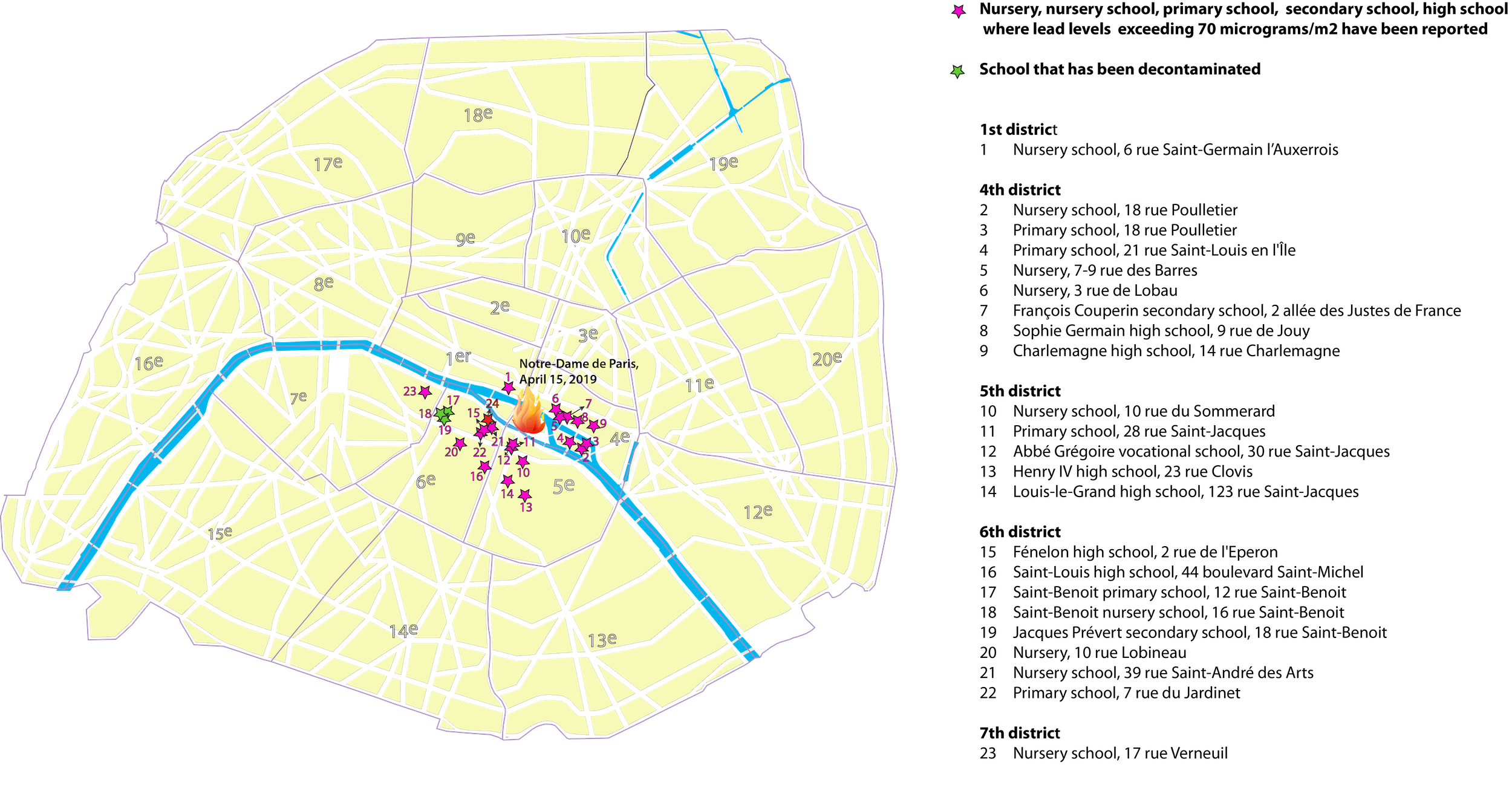 Only three schools, the Saint-Benoît nursery and primary schools and the Jacques Prévert secondary school in the 6th district, were decontaminated. The works, monitored by health and safety inspection, lasted 3 weeks.

The Île-de-France region is playing with the thresholds. It takes as a reference 1000 µg/m2, which matches with the maximum residual threshold after sanitation works. The Health Ministry instructions regarding the plan to fight child lead poisoning and to reduce lead exposure say that there is a risk of lead poisoning above 70 µg/m2. Seven high schools are currently polluted and no information is as yet available on sanitation methods, their efficiency and the expertise of the involved hands.

According to Robin des Bois, the pupils should not go back to schools where the lead measurements exceed 70 µg/m2 until sanitation and pollutant extraction works are not undertaken. This advice is primarily aimed at primary schools. Palliative solutions, such as concealing polluted areas with resins or other coatings, prohibiting access to the contaminated surroundings of trees or closing educational gardens do not guarantee in the short and medium terms the containment of lead dusts. These patch-up jobs would be the result of a lack of anticipation as well as carelessness in the taking into account of lead dusts as a health issue.

Regarding the 154 schools that were not diagnosed but are in the districts considered by public authorities to be under the influence of the Notre-Dame fire, we recommend to all parents, whether individually or collectively, to demand that the school directors display the lead diagnosis if it has been made or its planned implementation if it has not. High schools pupils also have the right to ask their Principal or teachers for this kind of information.

This is also the case for nurseries. In these districts, parents must demand that the diagnosis guaranteeing the absence of lead contamination be displayed.

Considering the drift and the accumulation of lead dusts on the pavement, it is recommended, as it is done in a nursery along the rue du Cloître-Notre-Dame, to set up a device at the entrance hall to take off urban shoes and pull overshoes, thus reducing lead dusts introduction into facilities welcoming children. The shoe soles of care personnel, parents and children are the main vectors of contamination, not forgetting pushchairs frames and wheels.

Schools Paris intra-muros are often unsanitary and exposed to old and new sources of lead, chlorinated solvent and volatile hydrocarbons. Robin des Bois’ 2017-2018 investigation lead to the exclusive diffusion on our website of 1207 summaries of ground diagnoses in places receiving children and teenagers and built on or around polluted grounds. It is not an exhaustive list. New school buildings are regularly in the spotlight because of asbestos, trichlorethylene for Paris and arsenic for the Orbiel valley (Hérault). On the whole, the situation is concerning. The National Education Minister stays silent about this.